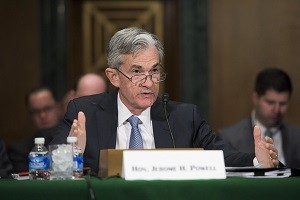 See our Q3 EUR forecast to learn what will drive the currency through the quarter.

Fed Chair Powell will be delivering his Semi-Annual Testimony before the Senate Panel at 14:00GMT, which will be the biggest focus for FX traders today. Since his appointment, Powell has largely avoided to cause a stir in the markets during his public addresses, as such there is possibility that the Fed Chair could re-emphasis the themes from the June FOMC meeting minutes by supporting the Fed’s current economic and rate path, whereby two more rate rises are seen this year.

Alongside this, the Fed Chair stated in an interview last week that the US economy is in a “good place” given the recent government tax and spending programs, consequently, this upbeat assessment is unlikely to change. Additionally, with Fed Fund futures only pricing in 74bps worth of tightening in 2019, compared the Fed’s projection of 125bps, there is scope for USD upside. If Powell reaffirms the case that the Fed will hike two times next year, this may prompt an unwind of the recent US/German yield spread tightening from the widest point in 30yrs, pushing the EURUSD rate lower.

Undoubtedly, one of the key subjects will be on the Fed’s thinking in regard to trade wars and its economic implications. In the FOMC’s June minutes, the Fed were cognizant about global trade risks, noting that these risks had intensified and were concerning, Powell also noted that trade disputes or high tariffs will be negative for the economy. As such, any hints that this would derail from its current rate path trajectory could lead to a sell-off in the USD-index.

The narrowing 2/10yr US bond spread has provided some concerns for many investors with the spread now a mere 26bps. Typically, a flattening yield curve, which inverts normally signals that a recession is on horizon, as was the case before the financial crisis. Consequently, focus will be also be placed on Powell’s view on the flattening curve.

IG Client Positioning Sentiment states that 51.8% of traders are net-long, suggesting that prices may continue to fall.