- Bullish momentum may see Bitcoin target $8,000 and above.

- UK hedge fund giant will add Bitcoin to its investments when CME futures are up and running.

Bitcoin continues its sharp recovery after last weekend’s sharp sell-off, trading back above $7,000 and recovering around two-thirds of its recent losses. The coin is also back above its bullish trend line – started around $3,000 on September 15 – although the sharp break-down and recovery over the weekend raises questions over its validity. Trend line support currently kicks-in at $6560, just below the 23.6% Fibonacci retracement support at $6,757. On the upside, congestion between $7,100 and $7,500 may slow BTC down before it makes a fresh attempt at $8,000.

Volume has also been heavy in both Bitcoin and Bitcoin Cash (BCH) after last week’s failed Segwit2x fork with miners swapping between the two coins regularly to maximize their mining profits. Over the weekend a record $7 billion BTC changed hands in a 24-hour period, along with in excess of $3.3 billion BCH, causing the latter’s price to spike to $2,800 before dropping back down to $1,250.

And switching has also seen a wide cross-section of altcoins rally, pushing the total current market capitalization to a record $218 billion.

We discussed the latest set-ups in BTC, BCH and ETH at this Wednesday’s Weekly Bitcoin – attached to this report - if you would like to join us in the future, please click here.

One of the world’s largest hedge funds, Man Group, said at a Reuters Summit Tuesday that it would invest in Bitcoin when the CME BTC futures are approved. Man Group CEO Luke Ellis said that while Bitcoin is not currently part of their investment universe, it could be, while if there is a CME future on Bitcoin “it would be.” Man Group currently has over $100 billion of assets under management. The CME recently said that they expect to launch BTC futures in mid-December, subject to regulatory approval.

Zimbabwe’s military has placed President Robert Mugabe under house arrest, as the country’s soldiers seize control of the country in an apparent coup, driving the domestic price of Bitcoin skywards. Reports say that BTC traded at over $13,000 on the un-regulated, domestic Golix exchange although turnover was small as buyers desperately searched for stock. Zimbabwe does not have its own currency after hyper-inflation rendered notes worthless in 2009 and instead uses the South African Rand or the US Dollar. 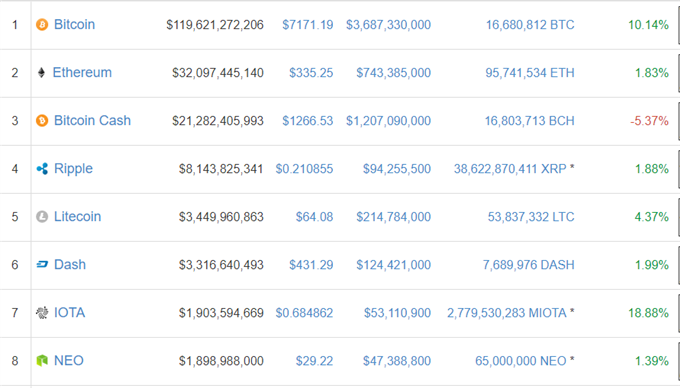