Bitcoin Gears Up for Another All-Time High

- Bitcoin recovers losses and looks at a new all-time high.

Bitcoin has shrugged off the latest round of profit-taking and continues to push back higher with all eyes set on a fresh attempt at $6,000. BTC traded as low as $5,125 on Wednesday afternoon before enjoying an uninterrupted run back to a current level of $5,695. Tuesday’s high trade around $5,775 is the next upside target ahead on Monday’s high print around $5,810. Recent momentum may be the result of the upcoming Bitcoin Gold hard-fork which should see a new token created. The last Bitcoin hard-fork produced a new, free, token called Bitcoin Cash for holders of the original coin. Bitcoin Cash traded above $900 a coin in the first couple of days before moving lower to its current level of $334. The fork is expected on October 25, although the value of the new coin may differ wildly from Bitcoin Cash depending on the communities support for the new crypto-currency.

We have been discussing the upcoming Bitcoin Gold hard-fork and its price-moving potential, over the last couple of weeks at our Weekly Bitcoin webinar on Wednesday’s at 12:00pm - if you would like to join us, please click here.

Ripple (XRP), currently the third-largest crypto-currency by market capitalization, continues to attract sellers in the wake of news that Tokyo police arrested the head of a Ripple exchange and trading platform for allegedly swindling $12,500 from an investor. The police are also investing other fraud claims against the manager of Ripple Trade Japan.

Ripple investors were also disappointed this that the company’s ‘Swell’ conference did not produce the positive headlines the market had been expecting. 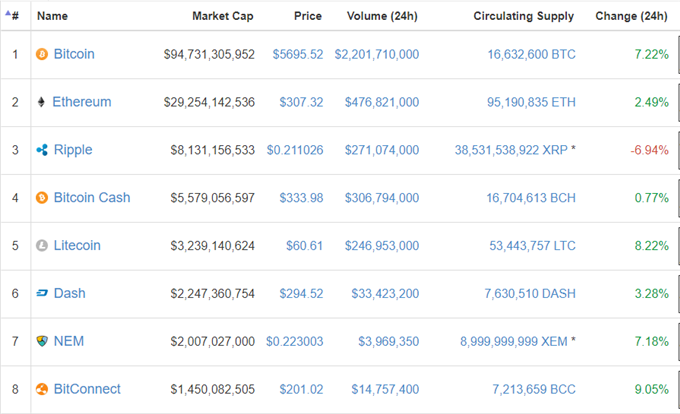