The Aussie Dollar generated more volatility than follow through Tuesday morning in the after math of the Reserve Bank of Australia rate decision to cut its benchmark rate to a record low. Heading into the announcement, overnight index swaps were pricing in approximately a 70 percent probability that the central bank would reduce its main lending rate by 25 basis points (bps). A more dovish, 80 percent of economists polled by Bloomberg expected the same.

The central bank ended up following through with market expectations and cut the key interest rates to 1.50 percent from 1.75 percent – yet another record low among global monetary policy. According to the central bank’s statement, they noted that prospects for inflation returning to target and sustainable growth have been improved by the cut. It added that the rate reduction is not likely to worsen housing market risks.

In May, the RBA reduced its main lending rate after a dismal first quarter CPI reading of 1.3 percent. In June, the Reserve Bank of Australia said that an unchanged policy was consistent with inflation and sustainable growth returning to target over time. Then, as James Stanley pointed out, the RBA minutes from July’s monetary policy announcement showed that the central bank may have been more amenable to cutting rates.

Following this month’s RBA decision to cut, the markets are carrying through dovish forecast for further follow up by the group and a 98 percent probability that 2 reductions will occur within a year. Taking this into consideration, perhaps the meeting minutes that will be associated with this press release could reveal if the Reserve Bank of Australia will continue to be data dependent. 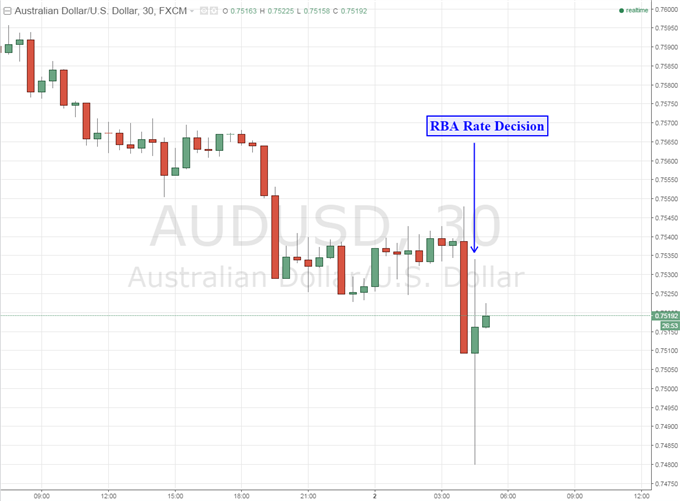