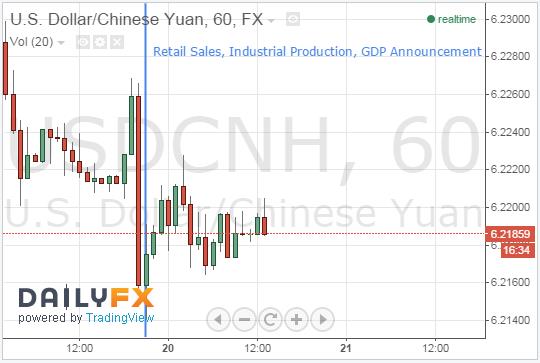 After posting the lowest annual economic growth in 24 years, the CNH continues a prolonged descent first embarked upon in November of 2014. This disappointing GDP report has outweighed the optimistic retail sales and industrial production data reported by the National Bureau of Statistics on Tuesday.

Despite optimistic retail sales and industrial production data, GDP growth released today came in at its lowest reading in 24 years, indicating an eminent slowdown. The annual expansion of 7.4 percent for 2014 is the slowest since 1990. In 2012 through 2013 China maintained an average annual growth rate of 7.7 percent. Leading up to 2010, Chinese annual growth averaged above 10.0 percent. The current slowdown in growth can be traced back to several indicators. Total fixed investment increased 15.7 percent last year, its lowest reading since 2001. Furthermore, property sales were down 7.6 percent last year, with unsold floor space up 21.6 percent by the end of December 2014.

The IMF lowered its expectation for the Chinese economy this year from 7.1 percent to 6.8 percent growth, indicating that investors could see slower growth out of China. Investors could also see further rate cuts similar to the one in the 4th quarter of 2014.With these expectations in mind, coupled with an ever-increasing USD due to expected Fed interest rate hikes, investors should expect a depreciating CNH in the near future.