The recent decline in USD/CAD appears to be stalling as it struggles to extend the series of lower highs and lows from the previous week, and the exchange rate may consolidate ahead of the employment reports due out of the US and Canada as Federal Reserve officials tame speculation for a looming shift in monetary policy.

USD/CAD attempts to retrace the decline following the Federal Open Market Committee (FOMC) interest rate decision as Governor Lael Brainard emphasizes that “joblessness remains high,” with the permanent voting-member on the committee going onto say that “employment has some distance to go” while speaking at the Annual Meeting of the Aspen Economic Strategy Group.

As a result, Brainard insists that she would “expect to be more confident in assessing the rate of progress once we have data in hand for September,” and the wait-and-see approach may produce headwinds for the US Dollar ahead of the next Fed rate decision on September 22 as the central bank pledges to remain “attentive to changing conditions and steady in our step-by-step approach to implementing policy under our new framework.”

Nevertheless, the update to the US Non-Farm Payrolls (NFP) report may put pressure on the FOMC to adjust the forward guidance for monetary policy as the economy is anticipated to add 900K jobs in July, and the Bank of Canada (BoC) may ultimately face a similar situation as Canada Employment is projected to increase 177.5K during the same period.

In turn, fresh data prints coming out of the US and Canada are likely to influence the near-term outlook for USD/CAD as both the FOMC and BoC carry out an outcome-based approach for monetary policy, but a further depreciation in the exchange rate may fuel the recent shift in retail sentiment like the behavior seen earlier this year. 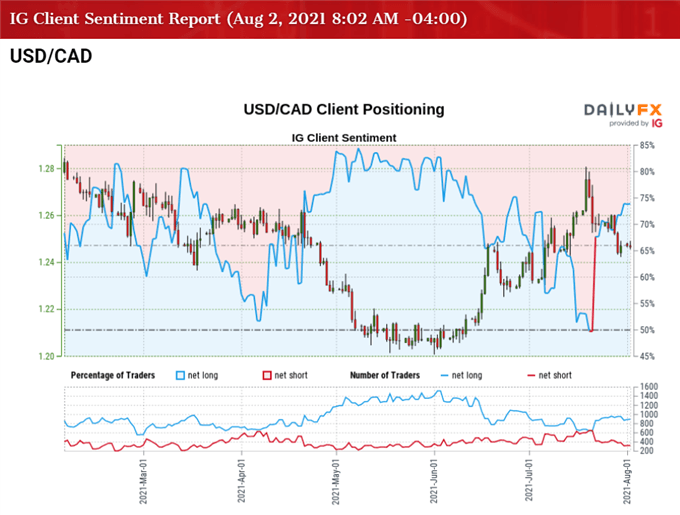 The IG Client Sentiment report shows 69.82% of traders are currently net-long USD/CAD, with the ratio of traders long to short standing at 2.31 to 1.

With that said, a further depreciation in USD/CAD may fuel shift in retail sentiment like the behavior seen earlier this year, but the exchange rate may consolidate ahead of the key data prints coming out of the US and Canada as it struggles to extend the series of lower highs and lows from the previous week.