Financial markets cheered a confident Fed yet wilted on fears of status-quo-shattering maneuvers from "team Trump" last week. The tug of war is set to resume in the week ahead.

US Dollar Forecast: US Dollar Rise on Fed Rate Hike Bets at the Mercy of Team Trump

The US Dollar may find renewed support from a hawkish Federal Reserve in the week ahead but worrisome headlines from Washington, DC remain a potent threat.

There are a few items of importance due up over the coming days that will move the Euro, but nothing that will materially alter its current trajectory. Major influences are likely to come from elsewhere.

The past week was a sorry one for Sterling bulls. A host of data has failed to inspire, and the Pound ended the week down against both the Dollar and the Euro after failing to capitalize on the political woes facing both the Greenback and the European single currency.

Headlines coming out of the G20 meeting may yield a limited reaction in USD/JPY as the group of global finance ministers strive to avert a currency war.

The Australian Dollar dodged a couple of bullets as local sentiment indicators soared, stealing some of the limelight from the US Fed as they did so. That will not happen again.

The two Dollar/Yuan pairs have been driven by different themes of recent: The Dollar’s strength weighted more on the offshore pair, while the onshore Yuan eyed more on moves from China’s Central Bank.

Crude Oil looks poised to end the week lower for the first time in five weeks. However, there is a silver lining. As of Friday morning, the weekly price range in Crude Oil is the smallest in 13-years.

Last week was a generally bullish one for equity indices outside of Japan, with U.S. and European markets showing modest to strong gains. Volatility was muted, something which traders are hoping will soon change.

Gold prices pressed higher for a third consecutive week with the precious metal up 0.39% to trade at 1238 ahead of the New York close on Friday. 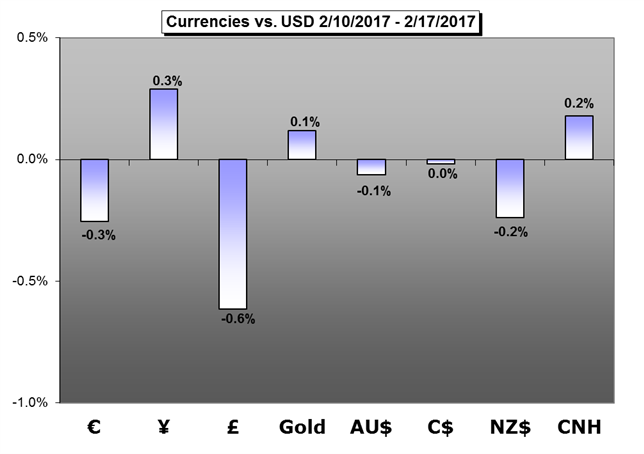