Last week’s surge in EUR/USD took it well above the 1.20 level that was seen by some commentators as a line in the sand for the European Central Bank: above it, the Eurozone would be uncompetitive and the ECB would intervene – perhaps orally, perhaps directly – to weaken its currency. In reality that seems unlikely; the ECB is more likely to look at the Euro’s value against a range of the currencies of the region’s major trading partners.

Nonetheless, traders are likely to be cautious about pushing EUR/USD higher still and that suggests a short-term period of consolidation for the pair. 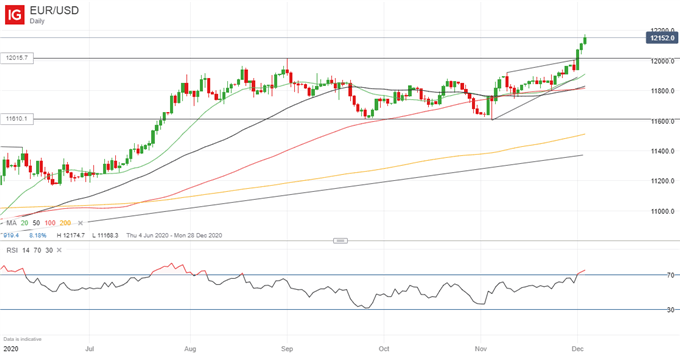 Note, however, that two important gatherings take place this coming week that could alter the outlook for the Euro longer-term. One is a meeting of the ECB’s Governing Council, which is responsible for Eurozone monetary policy. No change in interest rates is expected but the central bank has already dropped the heaviest of hints that it will ease monetary policy still further as it worries about the outlooks for both economic growth and inflation.

There are several levers it could pull but an increase in its Pandemic Emergency Purchase Program, or PEPP, of around €500 billion is the most likely. It could also extend its Targeted Longer-Term Refinancing Operations (TLTROs) on favorable terms and might even tweak it old Asset Purchase Program (APP). Any such action would normally weaken the Euro but these, of course, are not normal times and anyway an easing of monetary policy this coming Thursday has been very well flagged in advance.

The European Council of EU leaders also meets in the week ahead, with Covid-19, climate change, security and external relations all on the agenda. Notably absent is the subject of Brexit but it is inconceivable that the future relationship between the EU and the UK once the Brexit transition period ends on December 31will not be discussed either formally or informally.

The European Council meeting starts on Thursday in Brussels, and on Friday the leaders will gather again for a Euro Summit that will focus on banking union and the capital markets union.

On the data front, the most important statistic on the calendar is Tuesday’s ZEW economic sentiment index for Germany, and the consensus among economists is that it will fall to 35 from 39 previously. German inflation and industrial production figures are also scheduled, as is the third estimate of third-quarter Eurozone GDP, but these are unlikely to affect the Euro.