A perfect storm has developed for Canadian Dollar bears. In addition to Oil having risen ~70% from the February 11 low and the US Dollar falling to levels not seen since June, the Canadian economy continues to outperform rivals in terms of economic new releases relative to economists’ expectations. These developments brought about the Canadian dollar trading at its strongest level in 10 months to against the US Dollar below 1.2500 on Friday morning in New York.

Bank of Canada Governor Stephen Poloz made waves this week as he praised PM Trudeau and made clear and cogent arguments against negative interest rates. The Citi Economic Surprise Index on the Canadian Economy recently touched its highest levels since June at a time where other economies like the United States are consistently seeing economic prints fall short of economists expectations.

On Friday, Canadian GDP dropped 0.1*%YoY in February. Consumer consumption was an encouraging sign despite the contraction, which mainly came from manufacturing and drops in mining, quarrying, and the energy sector. Economic prints of this show the wisdom of the Bank of Canada of cutting when they did in 2015 and holding as they have in 2016.

The two major fundamental headlines upcoming this week is the Canadian Employment report and the Trade Balance Report for March. The employment report will align with the US Non-Farm payroll, but Canada may grab an unusual amount of attention as traders look for a comparison or favorable narrative to help explain last month’s gain of 40,600 jobs.

Trade Balance is always an important number as it helps to see how trade flows are employed in the economy. Specifically, with the resumption of activity in Emerging Markets and Canada’s role as a supplier of natural resources to Emerging Markets, a boost in the Trade Balance could continue to show that little is slowing the economy down. On the other hand, the 14.5% gain in the Canadian Dollar relative to the US Dollar might be blamed if exports take a dip relative to recent readings as Emerging Markets continue to chug along.

As mentioned earlier, there are three components that have led to a Canadian Dollar surge since the end of January in Oil, US Dollar, and Canadian Economic Data. However, if you would like to boil these factors down to one market to watch, the closing of the gap in 2Y sovereign yields between the United States and Canada is great.

Since January 15, we’ve seen through the 2yr US/CA spread a visualization of how divergence of respective monetary policy expectations have consistently declined. At the peak of CAD bearishness in mid-January, the spread between US/CA 2yr yields was at 60.34bps showing a significant divergent relationship between US monetary policy and CA monetary policy. Today, a day where USD/CAD traded below 1.2500, the spread was as narrow as 9.8pbs showing a combination of more pessimism about US rate hikes since January aligned with more optimism regarding the Canadian interest rate path. 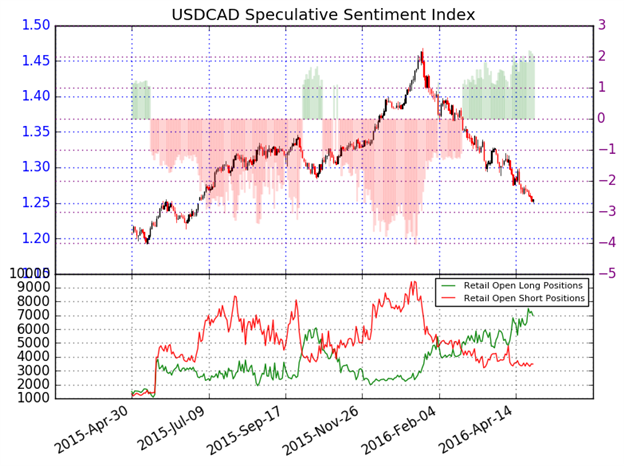 The chart above can help you see how sentiment shows turns in the market as well as acceleration points. When looking at sentiment, crowd sentiment has moved positive providing favor for more downside. In the second-half of March, the trend has picked up acceleration as more retail USD/CAD longs join the act. This loading in is visualized with the green line below the sentiment and price chart.

We use our Speculative Sentiment Index as a contrarian indicator to price action, and the fact that the majority of traders are net-long at a bull: bear of 2.01 as 67% of traders are long means that a bearish USD/CAD signal is currently at play.

US DOLLAR Technical Analysis: Score One For Seasonality