The Canadian Dollar could continue to surprise FX participants in Q2. On one hand, the US Dollar has had a very difficult time maintaining a bid, on the other hand, and likely correlated, commodities & emerging markets are making a significant comeback. Lastly, from a mean & median return standpoint, USD/CAD tends to show its largest losses (biggest CAD gains) in April. Therefore, if these trends continue, we could be in the midst of a larger decline despite the recent losses.

Emerging Market strength has been the surprise story of 2016, and it may be just gathering steam. Emerging Markets have been on a decline really since 2011/2, and it’s possible that the late January low was a significant low that could be reminiscent of the March 9 low in US Equities in 2009.

Of course, it’s still too early to pull the corks on the champagne bottles to celebrate EMs, but the recent strength is very helpful for Canada who exports a lot of commodities to emerging markets. One sign that’s too impressive to ignore is the Markit Emerging Markets Composite PMI (Seasonally Adjusted) has recently hit 50.6, which shows that as a composite, Emerging Markets are in expansion mode. If this expansion in Emerging Markets continues, it could be quite the windfall for the Canadian Dollar.

USD/CAD Chart Shows A Trend Not Worth Fighting

There is a strong zone of resistance between the Weekly R1 & R2 with the late March high and the 200-DMA (which is still rising) at 1.3372. The current channel that has framed price well, and that is drawn off a momentum peak of the move higher favors limited upside and a focus on new yearly lows toward a key support zone.

The key support zone combines not only the channel support but additionally the October pivot at 1.2835, but also the 38.2% Fibonacci Retracement level of the 2012-2016 range at 1.2757. If a strong trend is at play, we could utilize these levels as targets while not being surprised if we blow through them depending on what happens with the US Dollar or WTI Crude Oil.

When looking at sentiment, crowd sentiment has moved positive providing favor for more downside, and this trend appears to be stabilizing. We use our Speculative Sentiment Index as a contrarian indicator to price action, and the fact that the majority of traders are net-long at a bull: bear of 1.27 as 57% of traders are long means that a bearish USD/CAD signal is currently at play. This signal has been working itself out since late January. Now that the price has broken well-below the 200-dma, we’re now staring at the October low and the long-term 38.2% retracement level. A break below these new key support metrics and a move further into positive territory on the SSI would favor further downside towards downside targets mentioned above. 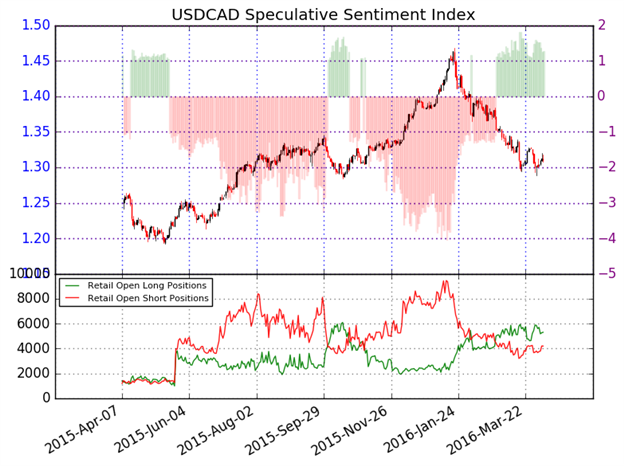