WTI Crude Oil broke above $45/bbl on a mixture of factors including a weak US Dollar, strong demand out of China, and a more balanced supply and demand picture than we’ve had in nearly two years. Now that we’ve crossed above the 200-DMA, which acted as such strong resistance since crossing below in early 2014, it appears there is little looking back. This change in market sentiment is significant because a move above $50 would likely start to see the low number of active rigs, a number that declined to balance the global supply glut, could start to rise again.

A Continual Change In Narrative Leaves Crude Bears In Doubt

A key factor in all the surge of Oil since mid-February has been the weak Dollar. While the US Dollar has been stubborn around the 11,800 level, a further push lower could take Oil closer and closer to the key $50 level.

What few appreciate is how aggressively market dynamics can change in a quarter. While commodity bullishness, along with Emerging Markets was contentious at the end of Q4 and beginning of Q1, that sentiment is now ubiquitous.

As a telling sign of sentiment, Dennis Gartman said in January in his “Garman Letter” that Crude Oil wouldn’t trade back above $44/bb “in my lifetime,” though he did see it as oversold at the time, and boy was it ever. As we’ve since risen 73% off the lows, it is clear that a lot of narratives as to how 2016 would play out have been annihilated.

The above chart is a medium-term price channel via Andrew’s Pitchfork tool with sliding parallels drawn with the slope of the median line off of key pivots. The lower handle is drawn off the February 11 low at 26.03. You’ll notice on the bottom-left of the chart; the sliding parallels have acted as key pivot support zones into Q2. Now that we have seen a break above the 200-DMA (currently near $40/bbl), our focus turns higher to the upper median line around $47.50.

The Support Zone in focus is the H4 Ichimoku Cloud, which aligns with the prior low near $45/bbl. Below here, there could be a quick drop to the 200-DMA, which would take a strong move lower down to ~$40/bbl. Given the significance of the Intermarket factors that have shifted since Oil broke above $40/ 200-DMA, only a move below there would change my bullish model. 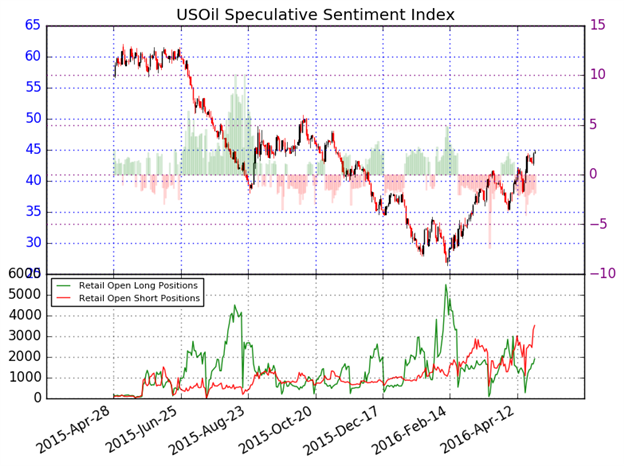 In addition to the technical focus around Andrew’s Pitchfork, the sliding parallels, and the Intermarket relationship of US Dollar weakness, we should keep an eye on retail sentiment, which could be warning of more upside price action. Further upside is aligned with our Speculative Sentiment Index or SSI.

According to client positions, the ratio of long to short positions in the US Oil stands at -1.70 as 37% of traders are long. Short positions are 9.1% higher than yesterday and 59.6% above levels seen last week. Open interest is 13.2% higher than yesterday and 30.2% above its monthly average. We use our SSI as a contrarian indicator to price action, and the fact that the majority of traders are short gives a signal that the WTI Crude Oil may continue higher. If the trading crowd grows further net-short, we could be in the works of an upside extension taking us closer to $50/bbl.