What a difference a few months make! As we head into the close of the April, though we still have FOMC coming up, the Canadian Dollar is the strongest G10 currency of the year. So far, the CAD has bested the US Dollar by nearly 10%. For the month, the Canadian Dollar is up nearly 4% against the US Dollar, which is second to the British Pound, which is the second-best performing currency in the G10 for April.

On Tuesday morning, we heard from Bank of Canada Governor, Stephen Poloz, who sounded understandably confident. Now, if you look at short-term interest rates markets in Canada, they are now pricing in rate hikes. While a lot was out of the hands of the Bank of Canada, they appeared to have played the commodity carnage the most effectively of major central banks.

On the chart above, the four-hour Ichimoku cloud allows you to see resistance that has not been worth fighting aggressively. The term “sell the rip”, does a fine job of encapsulating the environment we’re in where strength has been short-term and simply provides more attractive levels to sell as opposed to signs of a reversal. The Canadian Dollar is the clear strongest currency in G10FX, so it makes sense that not fighting this trend is the wise play.

Regarding resistance, we recently pivoted from 1.2750, which is the top of the H4 Ichimoku Cloud and the Weekly Pivot Point. Above 1.2750, should we get a break above there, the next level of focus will be at the 34-DMA. The 34-DMA has been solid resistance and currently sits 1.2970, which was the –mid-April high, and the corrective top of a three-wave move that eventually led to an impulsive decline that we’re in right now.

Given the strength of the trend, recognizing support seems like more of a formality. This is because most firm levels of support have been aggressively broken. The next levels of support I’m watching are the June 01 high at 1.2561 and the June 18 low and 50% retracement of the 2012-2016 range of 1.2160/26. In 64 days, marking the 2016 high of January 20, USD/CAD has reversed 2,060 pips so saying something needs to slow down or reverse course is too subjective for my taste. Furthermore, a break below the two support levels would turn attention to the May low of 1.19186.

When looking at sentiment, crowd positioning has continued to fight the trend aggressively providing a favor for more downside. We use our Speculative Sentiment Index as a contrarian indicator to price action, and the fact that the majority of traders are net-long at a bull: bear of 2.06 as 67% of traders are long means that a bearish USD/CAD signal remains at play. This signal has been working itself out since late January, and as you can see in the charts above, the fervor of the fight is growing. Now that the price has broken back below the 1.2600 level, we’ll continue to favor trend continuation toward the Weekly S1 Pivot at 1.2508. A break below these new key support metrics and a move further into positive territory on the SSI would favor further downside towards downside targets mentioned above. 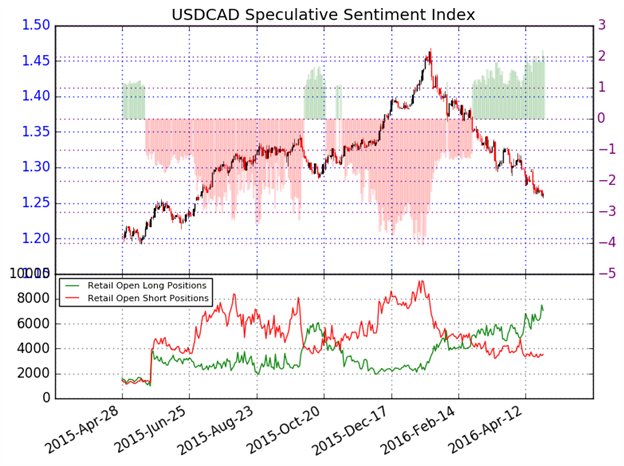