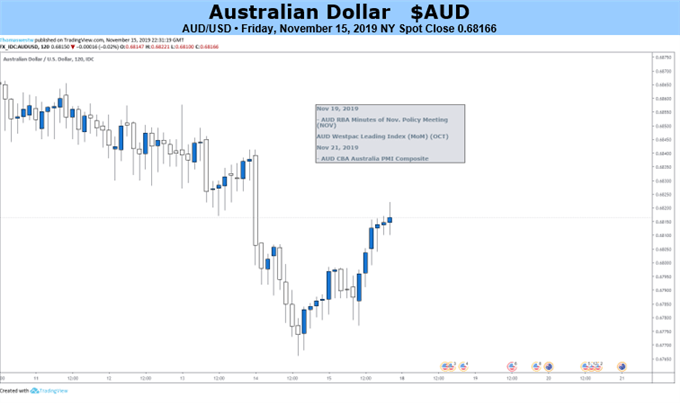 Australian Dollar bulls have had better weeks than the one just past, can they hope for better in the near future? Perhaps not.

The currency was hit especially hard thanks to a combination of negative factors, both foreign and domestic which took AUD/USD down to lows not seen since the middle of October. Some of these seem likely to endure, notably the uncertainty which still glowers over any US-China trade accord. The Australian economy is especially exposed to both countries, and hopes for, at least a truce, were behind some of the Aussie’s gains between October and early December.

Weaker Chinese economic data also weighed on the currency, and there can be no guarantees that we won’t see more of that. Federal Reserve Chairman Jerome Powell also declined to be as dovish as the market would like about US interest rates, hitting AUD/USD from the ‘USD’ side. That trend may also last.

The currency was also knocked by extreme weakness in the domestic labor market. Job creation faltered across the board, while the overall unemployment rate ticked up. Australian Dollar watchers may just have panicked a little too much at this, of course. Buoyant hiring has long been an economic bright spot, but the data series can be volatile and one weak month need not mean incipient disaster.

As for the coming week, Reserve Bank of Australia Governor Philip Lowe will speak in Sydney on Tuesday and anything he has to say on jobs will be keenly lapped up by the market. Tuesday is likely to be the currency’s busiest domestic-focused day of the entire week, in fact, with the minutes of the RBA’s last monetary policy meeting also due. The Official Cash Rate went below 1% for the first time ever at that event, and the market is a little less than certain that it will go any lower this cycle, so commentary will be at a special premium.

There may be less pressure on the currency in the next few days simply because there are fewer scheduled data events likely to provide it. That said the Aussie’s retreat looks as though it may well have further to run and, with interest rates at such low levels, it is hard to get too optimistic. 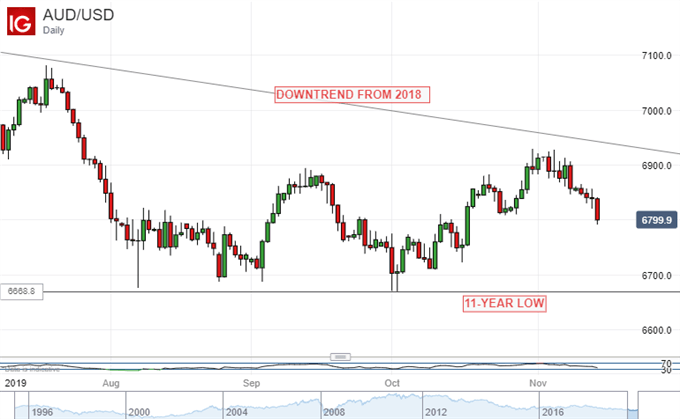