The Australian Dollar had already taken a major hit from news of domestic employment weakness on Thursday, only to slip a little further as Chinese industrial production numbers disappointed the markets.

October’s production rose an annualized 4.7%, well below both the 5.4% investors had hoped for and September’s 5.8% rise. The numbers came as part of a large release of Chinese data, most of which missed expectations even if they were a little close than the industrial numbers.

Retail sales rose 7.2% on the year, below the 7.8% hoped for, while fixed asset investment grew by 5.2%, when 5.4% had been expected. China’s external sector is clearly still being held back by trade war worries, with ongoing unrest in Hong Kong unlikely to have helped matters. Internal demand looks more resilient so far as the retail figures show.

The Australian Dollar can act as the foreign exchange markets’ favorite liquid China proxy thanks to its home nation’s vast raw material export ties to the world’s second largest economy. Sure enough, it slipped after the numbers. The New Zealand Dollar traded similarly, having been battered earlier when AUD/USD retreated. Both commodity units seem to be displaying common trading characteristics despite marked differences in the two countries’ economic performances. 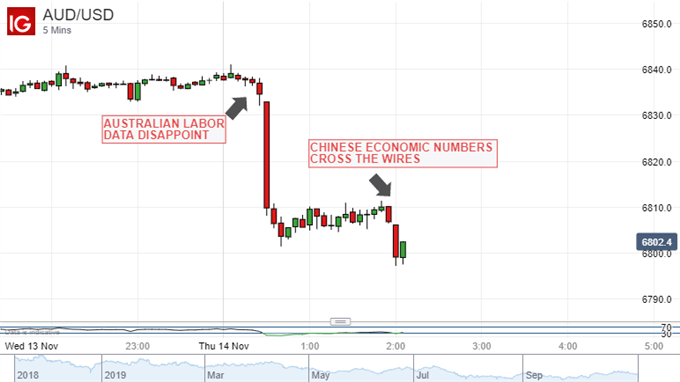 However, domestic Australian factors are probably dominant on Thursday thanks to the release earlier of surprisingly weak official employment data. These have been a bright spot for the Australian economy for years and one feeble month won’t necessarily dim it much. However, job creation sputtered across both full and part time work last month, and November’s data will be keenly awaited for any evidence that this trend is digging in.

AUD/USD made notable gains through October as optimism mounted that a US-China trade deal might be struck. 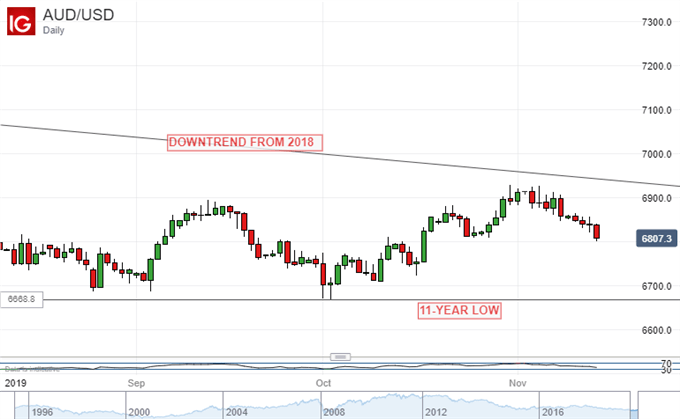 However, that optimism has not so far been rewarded and, in the face of a generally stronger US Dollar and that weaker economic data, the Australian Dollar is clearly back under duress. The currency still lacks monetary policy support of its own. Australian base rates remain at their record low of 0.75% and more weak labor data will probably encourage those who think that they may go further down yet.

In this environment it is hard to get very bullish on the currency, and its recent, eleven-year lows may be back in focus soon, even if they hold.