The Australian Dollar sank in early Thursday Asia trade following October’s local jobs report. Australia lost 19.0k employed workers against expectations of a 15.0k rise. That was the most positions lost since September 2016 as the unemployment rate unexpectedly climbed to 5.3 percent. That latter was the highest rate since June 2018. The labor force participation rate also unexpectedly declined to 66.0% from 66.1%.

The latter might have reflected discouraged workers exiting the workforce altogether. In short, this does not bode well the Reserve Bank of Australia which has made its message clear about how closely it is watching the jobs market. Local bond yields declined, reflecting rising bets of a near-term rate cut from the RBA. Odds of a February 25bp reduction stand around 53 percent probability as implied by the futures market.

On Wednesday, the New Zealand Dollar outperformed against its major counterparts after the RBNZ surprised markets and delivered a rate hold instead of a cut. The sentiment-linked currency struggled to add onto its upside momentum despite Wall Street ending the day cautiously higher. There, the S&P 500 was jawboned by fundamentally positive and negative news which made for a rocky session.

Initially, risk appetite improved as Fed Chairman testified to Congress. He said that their policy is appropriate as long as the economy stays on track even though the baseline outlook is favorable despite “noteworthy risks”. In short, this could mean that rate hikes may not be on the table for some time with inflation running slightly under target. Despite this, the anti-risk Japanese Yen aimed cautiously higher.

Hours later, updates on the US-China trade war front spooked investors. Reports crossed the wires that the phase one trade deal “hit a snag”. The key issue is regarding the $50b in agricultural purchases US President Donald Trump claims China will make. However, the latter has made it clear that it not only wants the former to hold off on raising tariffs against it, but also to begin unwinding them.

S&P 500 futures are pointing cautiously higher as Thursday’s Asia Pacific trading session gets underway. This may translate into a broadly pessimistic mood in financial markets which may keep fueling gains in the Yen. The Australian Dollar will now be looking to Chinese industrial production and retail sales data. A softer-than-expected outcome may weaken the AUD given its nature as the market’s favored China-liquid proxy.

Following the jobs report, AUD/USD tumbled through a near-term rising support channel from the beginning of October. This followed a failed attempt to breach the falling resistance channel from December 2018 after prices topped earlier this month. With that in mind, the Aussie could be on its way towards revising lows the pair reached in August, September and October.

This is as IG Client Sentiment is offering an AUD/USD bearish contrarian outlook. Retail trader data shows that about 59.09 percent of Aussie traders are net long. Traders are further net-long than yesterday and last week, and the combination of current sentiment and recent changes gives us a stronger AUD/USD-bearish contrarian trading bias.

Join me later today at 1:00 GMT as I cover what the prevailing trends in market positioning are revealing about the outlook for the major currencies! 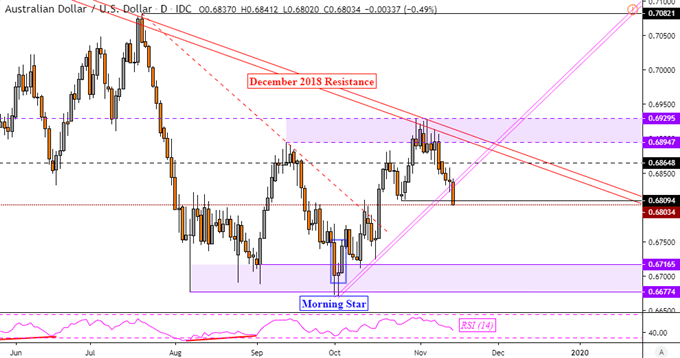