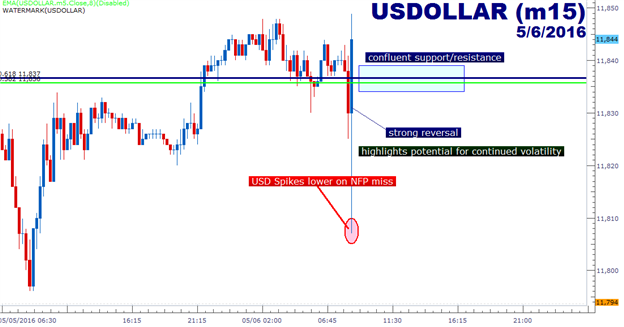 - April Non-Farm Payrolls were released out of the United States, with a median expectation for a print of +200k. The actual print was +160k.

- The unemployment rate held flat at 5%; but this may not be a bullish factor given the change to the Household Employment Survey.

United States Non-Farm Payrolls were released for the month of April, and the median expectation coming into the announcement was for an addition of 200,000 jobs to have been added to American payrolls. The actual print was +160k, or -40k below the median expectation. The unemployment rate stayed flat at 5%; but keep in mind that this unemployment number is not derived from the NFP number, it’s a product of the Household Employment Survey, which fell by -316,000 jobs. Average hourly earnings were up, printing at 2.5% v/s a 2.4% expectation and a 2.3% prior print.

The initial reaction was a quick spike US Dollar weakness as we now have more evidence of slowdown in the American economy; and perhaps more importantly this evidence of slowdown is showing in the portion of the US economy that was previously thought to have been strong (employment). As we had mentioned yesterday, this Non-Farm Payrolls release would likely be one of the last chances for a data print to keep alive hopes for a potential rate hike out of the Fed at their next meeting in June, which has been the primary factor of weakness in the US Dollar run lower over the past three months.

USD has displayed heightened volatility in the wake of the release, running higher after the initial spike lower. Traders would likely want to wait for near-term price action to calm before looking to adjust swing or longer-term positions.