- Tomorrow brings Non-Farm Payrolls out of the U.S. for the month of April. The median expectation is for +200k jobs to have been added to American payrolls, and as usual, the print relative to the expectation will likely be the biggest mover. Be careful, and be sure to address risk management before trading in such environments.

- The predominant theme over the past few months has been USD weakness as the Fed’s moved rate expectations to more closely resemble market expectations. If tomorrow’s report comes in soft, we can certainly see extension of those themes, as USD is near resistance while Gold and EUR/USD are near support. We go over price action setups for all three below.

It's been an interesting week already, and we still have the big piece of news remaining in tomorrow’s Non-Farm Payrolls report out of the United States. We’re going into this report with the median expectation for 200,000 jobs to have been added to American payrolls in the month of April, and as is usual for one of these widely-followed data prints, it’s the relative read of the report that will likely be most meaningful for price action.

The big implication for tomorrow’s NFP report will be its impact on June rate expectations out of the Federal Reserve. A weak US Dollar has become a pertinent theme across markets since Mid-February which is, not coincidentally, when risk assets began their recovery. This marked the bottom on the S&P 500 as well as the bottom in Oil prices. Rising Oil prices have provided an extra sense of relief after the back-breaking down-trend threatened to roil bank’s balance sheets; so we’ve had some pleasant synergy working in market’s favor for the past ~3 months.

Each Fed meeting since that February 11th low has produced even more USD-weakness as the bank has backed away from their median expectation for four hikes in 2016. March saw the Fed take that expectation down to two rate hikes for 2016 as opposed to four, and April brought another somewhat-dovish statement from the bank that stayed non-committal towards June rate hike expectations.

The Fed has said all-along that rate hikes will be data dependent, and as we go into tomorrow’s NFP report, employment remains one of the strong points in a US economy and this is a central driver for the increased rate expectations that markets have struggled with thus far on the year. Tomorrow’s print will be widely watched to look for clues as to how healthy the American labor market might be.

Should NFP print with a strong number well above the +200k expectation, this would likely imply that a June rate hike out of the Fed is not yet off the table; while a dismal print will help to further extinguish those odds. At this point, current expectations are around ~10% for a June rate hike, after budging up to just over 25% after the most recent FOMC meeting on April 27th.

We’ve seen the US Dollar mirror this theme of lowered US rate expectations as it’s driven aggressively lower, particularly over the past two months, falling by 4.4% since the beginning of March. We’ve been following this theme closely and yesterday we had looked at the price action setup in the Greenback as it continued to retrace higher ahead. As we had looked at, old resistance in the 11,787 area had begun to show as support; and given the veracity of the prior down-trend, an observation like this could simply infer caution towards pressing the short-side of the move. If price action is showing higher-highs and higher-lows on the short-term charts, the longer-term short-side resumption play probably isn’t yet ready. Since we published yesterday, we’ve seen another support test off of this 11,787 level. 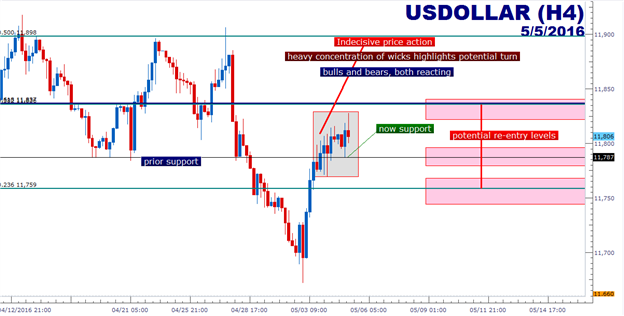 One of the areas that’s benefited the most from this recent bout of USD-weakness, and also something that could get some additional interest on the back of the ‘low inflation, low rate’ theme is Gold. That shift in February across risk markets produced a strong top-side breakout in Gold prices. After spending over two years in a downward sloping trend-channel, Gold staged an aggressive breakout just after Ms. Yellen testified in front of Congress on February 11th.

We went over the current setup in Gold on Monday just after another higher-high came in at $1,301.61, which is the 50% Fibonacci retracement of the 2008-2011 move. As we looked at, traders would likely want to wait for more confirmation of support before pushing another top-side entry. With NFP on the docket for tomorrow and a USD that’s looking more and more ready to move, this market could see considerable volatility should NFP print far outside of expectations. 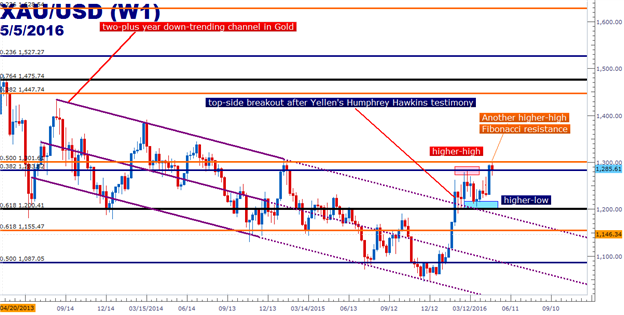 Another market that’s seen considerable run on the back of the weak Dollar has been the Euro. We discussed this setup on Monday just after EUR/USD ran up to another new near-term high. As we advised, traders should be cautious towards chasing new highs or new lows. If you’re trading a breakout, you want to be long or short when the break actually takes place. If you get long afterthe break, before support or resistance has been confirmed, well that’s chasing…

On Tuesday we saw a rather interesting technical inflection show up as EUR/USD ran into the under-side of a bear-flag that’s defined a large portion of the pair’s price action over the past year came back-in as resistance; the last time of which took place on, you guessed it, February 11th. On Tuesday as those new highs were coming in, we looked at two different support zones on the EUR/USD chart that may become usable for re-entry, and we’ve just moved down to the first of those today. Support isn’t yet confirmed as prices haven’t stopped moving lower yet, but this is something we can watch for today as we near tomorrow’s NFP report. To use price action to trigger entries, please check out our article, The Price Action Trigger. The updated setup in EUR/USD is below: