Even though Canada Retail Sales are projected to hold flat in December, a pickup in core spending may curb the near-term rebound in USD/CAD and keep the exchange rate within a narrow range as it highlights an improved outlook for growth and inflation.

Waning demand for large-ticket items may keep the Bank of Canada (BoC) on the sidelines as the central bank warns ‘negative wealth and income effects will persist’ over the policy horizon, and Governor Stephen Poloz and Co. may preserve the highly accommodative policy stance throughout 2017 in an effort to encourage a stronger recovery. Nevertheless, signs of stronger consumption may prompt the BoC to soften its cautious tone, and the central bank may sound more upbeat over the coming months as ‘the global economy is strengthening largely as expected and prices of some commodities, including oil, have risen.’

Easing price pressures paired with the ongoing improvement in the labor market may fuel an unexpected pickup in retail spending, and a positive development may heighten the appeal of the Canadian dollar as it pushes the BoC to gradually move away from its accommodative policy stance.

However, narrowing home purchases accompanied by the slowdown in private-sector lending may drag on household consumption, and a downturn in retail spending may fuel the near-term rebound in USD/CAD as it encourages the BoC to keep the benchmark interest rate at the record-low for an extended period of time. 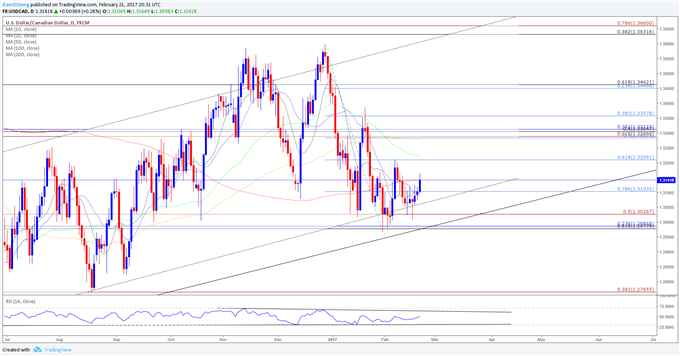 Canada Retail Sales increased another 0.2% in November after expanding a revised 1.2% the month prior, while the core measure for household consumption unexpectedly advanced 0.1% during the same period amid forecasts for a flat print. A deeper look at the report showed demand for building materials climbed 2.9% in November to lead the advance, with furniture sales rising 2.0%, while discretionary spending on clothing narrowed 0.1% during the same period. The market reaction to the mixed data prints were short-lived, with USD/CAD struggling to hold above the 1.3350 region as the pair closed the day at 1.3309.

DAX: New Highs Around the Bend

Euro Opens The Week on The Backfoot as Uncertainty Grows