- The US-China trade negotiations are front-and-center once more, with Chinese Vice Premier Liu He in Washington, D.C. to meet with US Treasury Secretary Steve Mnuchin and US Trade Representative Robert Lighthizer.

- The calamity unfolding in UK parliament may actually be the reason why the British Pound is staying afloat.

The US Dollar (via the DXY Index) is treading water for the second straight day, with traders lacking concrete catalysts in the near-term to help divine the next major move. Back-to-back dojis on the daily chart speak to this state of indecision, and the lack of significant economic developments out of the United States this week may be contributing to the state of trance. The greenback appears to be waiting to take cues from other asset classes, as both US equtiy markets and Gold prices are pulling back after their recent extended rallies.

As the February 26 (UK parliament takes control) and March 29 (UK leaves EU) deadlines approach, the growing number of departures from both the Labour and Tory parties into a new, pro-Remain political party, “The Independent Group,” is a sign that a no deal, “hard Brexit” might be avoided. After all, UK PM Theresa May’s hold on power is proving increasingly tenuous, now that her majority in parliament is down to a skinny eight votes. Paradoxically, the more defections that take place, the greater the likelihood that the UK will have to push back its Brexit deadline and pursue other options, like a general election or second refernedum, instead.

The economic calendar has been quiet this week for the US, outside of a few housing market releases and the January FOMC meeting minutes. Stepping into this void is the next round of US-China trade war negotiations taking place in Washington, D.C. Chinese Vice Premier Liu Hi is meeting with US Treasury Secretary Steve Mnuchin and US Trade Representative Robert Lighthizer, and it’s possible that the groundwork is being laid to avoid the early-March deadline.

After all, US President Donald Trump said that the deadline wasn’t “magical,” raising hopes that the negotiation window could be extended without the trade war intensifying. Otherwise, without a deal, the 10% tariff on $200 billion of imported Chinese goods will evolve into a 25% tariff on March 2. 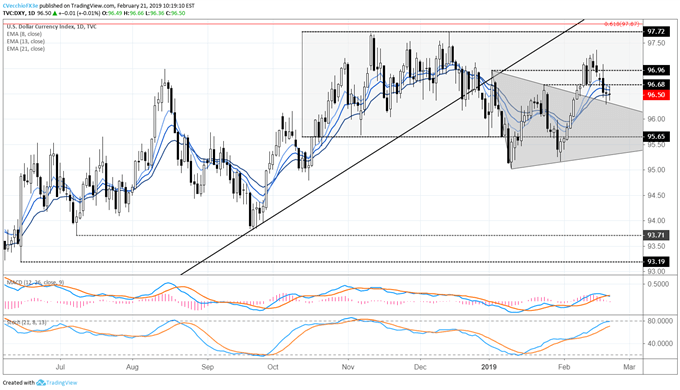 After seeing bearish outside engulfing bars develop between last Friday and Tuesday, any near-term bullish view was negated earlier this week. There’s little reason thus far to think that the near-term outlook is anything other than neutral at present time. A doji candle yesterday hinted at the state of indecision, and the inside day doji forming today compounds the state of turbidity. It thus still holds that a return back into the symmetrical triangle (below 96.30 by the end of this week) is necessary to constitute a shift to a fully bearish point of view in the short-term.