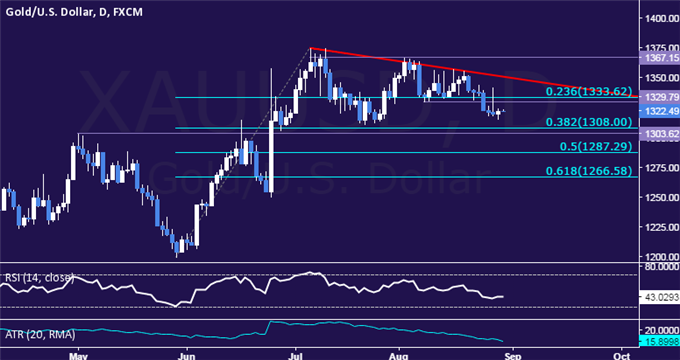 Crude oil prices edged lower amid emerging doubts about a possible output freeze accord at next month’s informal OPEC meeting in Algiers. Iran Oil Minister Bijan Zanganeh said the country aims to regain market-share lost to sanctions since 2012 before participating in any supply-limiting agreements, according to a report from state-run media. A separate Reuters report cited Adnoc’s Salem Al Matroushi saying the UAE plans to boost output to 3.5mbd, an increase of 20.7 percent from the 2.9mbd supplied in 2015. The weekly inventory flows estimate from API is on tap ahead.

Gold prices edged narrowly higher – snapping a six-day losing streak – as US bond yields pulled back and the US Dollar corrected narrowly lower amid digestion of Friday’s hawkish comments from Fed Chair Janet Yellen. The head of the central bank’s policy-setting FOMC committee said “the case for an increase in the federal funds rate has strengthened in recent months”.

“Fed-speak” continues to be in focus in the near term as Vice Chair Stanley Fischer speaks with Bloomberg TV. Fischer’s interview with CNBC immediately after Yellen’s speech last week seemed to shape the markets’ ultimately hawkish interpretation of her remarks. Asked whether investors ought to be readying for a hike as soon as September and possibly more than one rate increase this year, Fischer said Yellen’s remarks suggested the answer on both counts is “yes”. Doubling down on hawkish guidance bodes ill for gold prices whereas an attempt to soften last week’s remarks may offer the metal a boost.

What do past gold and crude oil price patterns hint about current trends? Find out here!

CRUDE OIL TECHNICAL ANALYSIS – Crude oil prices are marking time in a narrow range having signaled a top with the formation of a bearish Evening Star candlestick pattern. A daily close below the 23.6% Fibonacci retracement at 46.65 targets the 38.2% level at 45.22. Alternatively, a reversal above the 14.6% Fib at 47.54 exposes the August 22 high at 48.97. 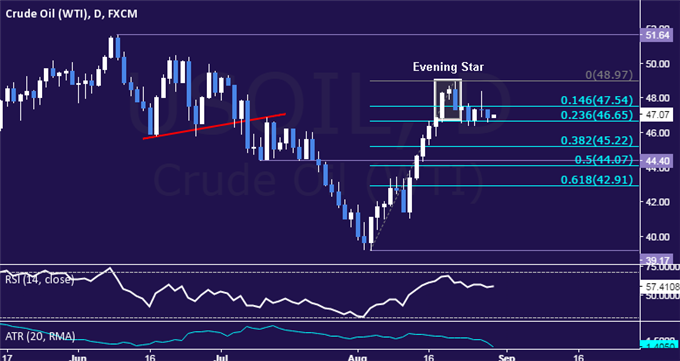