Early Thursday – several hours after the New York closing bell – Bitcoin made a sudden and sharp drop. Tesla’s CEO Elon Musk tweeted a statement announcing the suspension of Bitcoin payments for Tesla vehicle purchases. Mr Musk noted the environmental impact, saying “We are concerned about rapidly increasing use of fossil fuels for Bitcoin mining and transactions, especially coal, which has the worst emissions of any fuel.” Tesla’s stock was down just over 1% in after-hours.

Bitcoin dropped over 7% on the news, and while not necessarily an unusual move for the volatile crypto asset, it does showcase that Mr. Musk’s statement caught traders off guard. BTC/USD’s technical posture was weakened, with the 100-day Simple Moving Average (SMA) being breached. Support from near the 61.8% Fibonacci retracement appeared supportive, but MACD and RSI are signaling a weak stance. 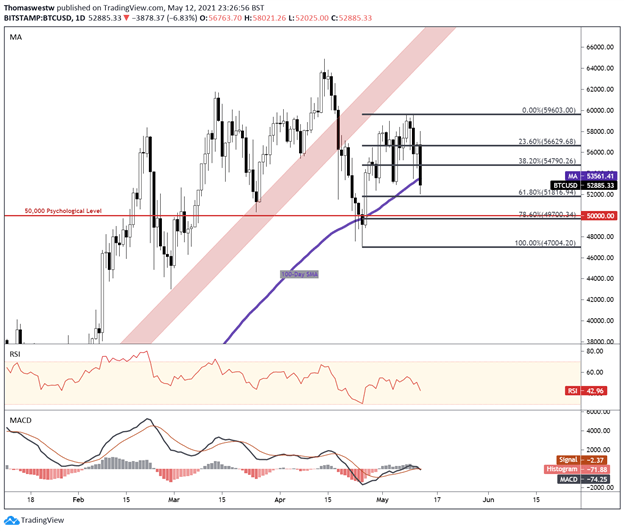 Asia-Pacific markets are likely to open lower on Thursday after a blowout Consumer Price Index (CPI) print sent markets into a frenzy. Treasury yields quickly shifted higher following the price data, with the benchmark 10-year yield rising to as high as 1.699%. Equities went into a tailspin as rate traders moved against the Federal Reserve’s “transitory” narrative.

The US Dollar tracked US government bond yields higher as traders digested the economic news. Fed Vice Chair Richard Clarida spoke on Bloomberg TV, defending the Fed’s stance saying, “Over the next few months 12-month measures of inflation are expected to move above our 2% longer-run goal, largely reflecting, I believe, transitory factors, such as a run of year-over-year comparisons with the depressed prices recorded last year.”

Still, markets largely looked past the Vice Fed Chair’s comments, remaining transfixed on the surprise CPI overshoot. The market effects were not contained to just US equity and bond markets. Risk-sensitive currencies moved sharply lower, one being the Australian Dollar, losing near 1.5% versus the Greenback. Precious metal also sold off, including gold, an asset classically seen as an inflation hedge to many.

Elsewhere, early Thursday US Energy Secretary Jennifer Granholm announced via Twitter that the Colonial Pipeline will restart operations at 5:00 PM Eastern Time (21:00 GMT). The major US fuels pipeline was taken offline over the weekend when a cyberattack forced a shutdown which caused gasoline prices to rise across the US.

While fuel will take at least several days to extend through the affected areas, the announcement will likely cause fuel prices to ease as consumers' fear calms. Wide-spread fear over a prolonged shortage caused hoarding behavior which further added to the pressure on gas prices. WTI crude oil fell slightly following the announcement, although prices remained higher on the day.

Today’s economic calendar has data slated to cross the wires from Japan and Australia, with the former reporting on foreign bond investment and bank lending, and the latter will report consumer inflation expectations. Australians in April forecasted a 3.2% rise in prices. A higher figure today may bode well for the Australian Dollar.

AUD/USD saw a drop of near 1.5% overnight, breaking below its 20-day Simple Moving Average (SMA) and a former level of resistance seen through April at 0.7750. A further selloff will bring the currency pair into contact with its 50-day SMA, along with a confluent level of support at the 0.77 handle. MACD hints at more weakness, with a cross below its signal line. 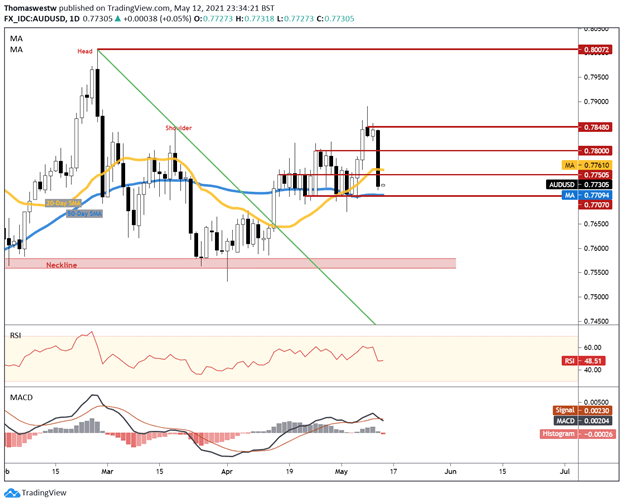