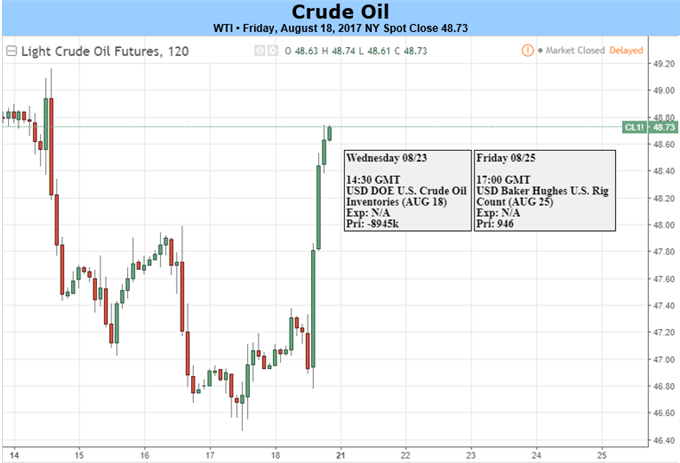 Blame it on the increasing supply. On Wednesday, data from the EIA showed U.S. Crude Output has increased by 79,000 bpd. The increased supply coming into a market already trying to work itself out of a glut was enough to send WTI Crude Oil lower for the third straight week after failing near $50/bbl earlier in the week. You could rightly argue that output is high because seasonal demand is high, but it is less certain if supply will drop as aggressively as demand given that anticipated hedging will lock in prices that will keep U.S. production profitable.

Other data that came on to the scene this week that brought about discouragement for Bulls was a statement from the National Bureau of Statistics showing that China’s oil refining, the world’s largest source of demand, fell by the most in three years in July and future demand forecasts were cut. Despite falling inventories, it appears that increased supply will limit the aggressive upside. In a positive note for demand, divergence between physical markets in the US such as Texas’ Permian Crude is at a six-month high premium vs. the benchmark market of WTI. This could show the benchmark contract, US Oil will need to play catchup, but before you get too excited, most of the demand is coming from refiners that are producing record amounts of gasoline, and are likely set to cool demand as summer winds down.

As we await the next week of trading, the takeaway seems to be that US production from shale will continue to add resistance to further price advances while OPEC compliance to cuts is waning. We have discussed in the past a large amount of WTI puts recently engaged when Oil was near $50/bbl, which allows producers to lock in a selling price and produce to their heart’s content, which, with history as a guide is on an upward trajectory.

We are beginning to see fundamental support in the Oil market. Click here to see our Q3 forecast on what outcomes we're watching!

The simplest definition of a downtrend in technical analysis is lower lows and lower highs. That is exactly what we have seen on the chart below in 2017. Naturally, a trader attempts to look for the earliest credible sighs for a reversal and works to validate and trade a reversal. Currently, we are pulling back for the third weekly decline from a lower high near $50/bbl that Oil traded at the months open. A break below the higher low of $45.38/bbl would open the credible argument that the summer rally was a seasonal event that is set to reverse and continue the longer-term 2017 trend of a break market. Only a break back above $50.40 will revive the Bull’s case. 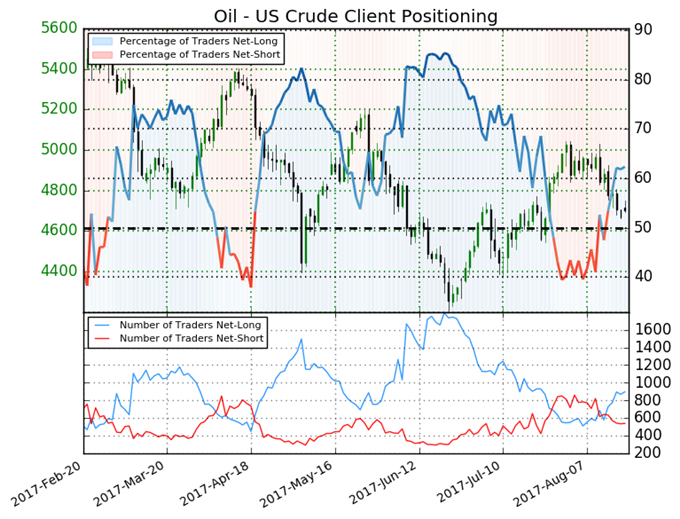 We typically take a contrarian view to crowd sentiment, and the fact traders are net-long suggests Oil - US Crude prices may continue to fall. Positioning is less net-long than yesterday but more net-long from last week. The combination of current sentiment and recent changes gives us a further mixed Oil - US Crude trading bias (emphasis mine).