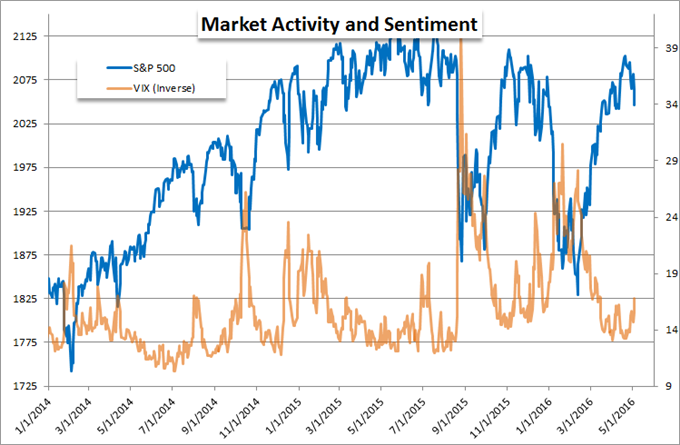 Volatility Unsettles Rather Reassures and FX Activity Is Leading the Way

See the DailyFX Analysts' 2Q forecast for US Oil along with their favorite 2016 trading opportunities on the DailyFX Trading Guides page.

Volatility measures for many of the key asset classes have withdrawn to remarkably low levels. However, the backdrop for market risk and the persistence of FX volatility signal conditions are far more troubling than what these simple indicators may suggest.

Most implied volatility measures are backed out of their relative, underlying products’ options pricing. This is essentially the cost of the unknown. And, if these products are used to hedge their underlying exposure from adverse moves, we end up with an assumption of market direction. Since the bulk of market participants in equities for example are of the buy-and-hold mentality, the hedge is usually against declines which makes the stock-oriented VIX indicator a favored ‘fear’ gauge. However, these simplistic interpretations do not always hold.

Below is the net speculative positioning among large trader in the futures product based on the VIX Index. As can be seen, there has been a sharp increase in short positions for VIX futures despite the underlying index standing at the lower bound of its range the past year. That may reflect an optimism for ‘risk appetite’ that see equities and the like advance, but why build a significant short in an already thin return derivative? With derivatives, there is a time value that can be collected by the short side but is worth very little in the way of return. It is a topping off return but draws considerably more risk than yield. The saying is ‘picking up pennies in front of a steamroller’. 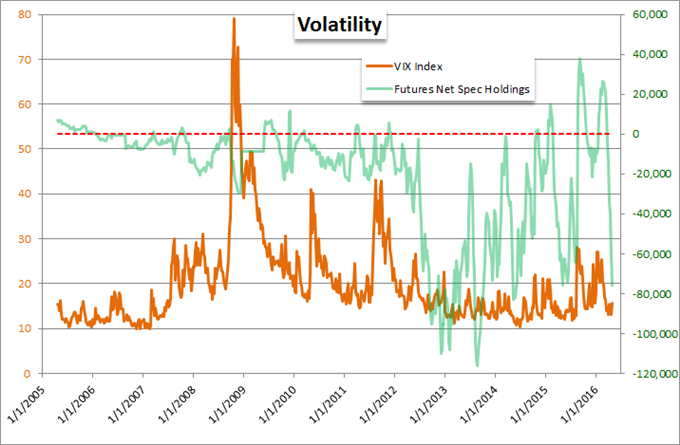 Another interesting circumstance is the level of exposure to this popular volatility product. Volume or trading in the VIX futures tends to follow the level of the market – higher volatility generally begets more reaction – but open interest is more sentiment oriented. Open interest is the total exposure the market has to this product, and we have seen a remarkable swell over the past few months back towards record highs of past years. This could be a speculative reach, but it is more likely the reflection of a market increasingly uncertain of its risky exposure and a demand for insurance. 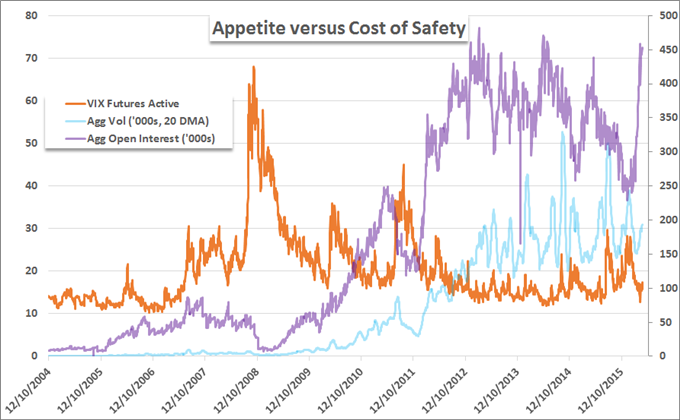 While the VIX index for equities is perhaps the most popular measure, there are measures for many asset classes including bonds, emerging markets, commodities and FX. Similar to that for equities, volatility measures for commodities like gold and oil, Treasuries and emerging markets have substantially deflated from their early February swells. As with shares, this may reflect a blend of speculative reach and a warped haven appeal. Yet, what we can also garner from this comparison is that FX volatility seems to be holding more persistently buoyant. 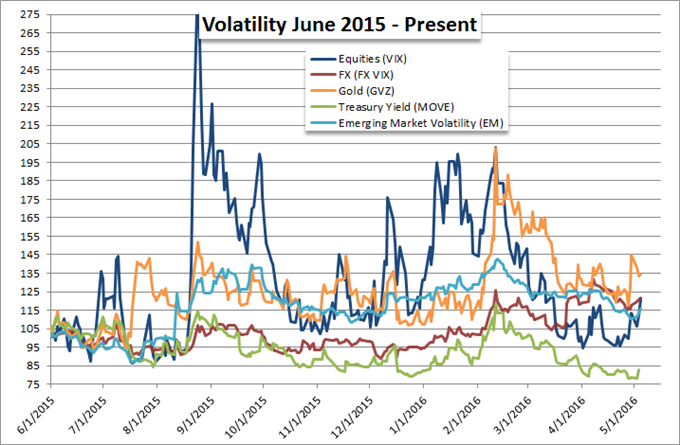 While the FX market is itself not nearly as volatile as stocks or commodities, its level compared to its own historical trend has swollen these past few years and actually now holds just off the four-year highs the index set last month. We can see the comparison more clearly below in the comparison to the traditional VIX and we set scale on different axes. 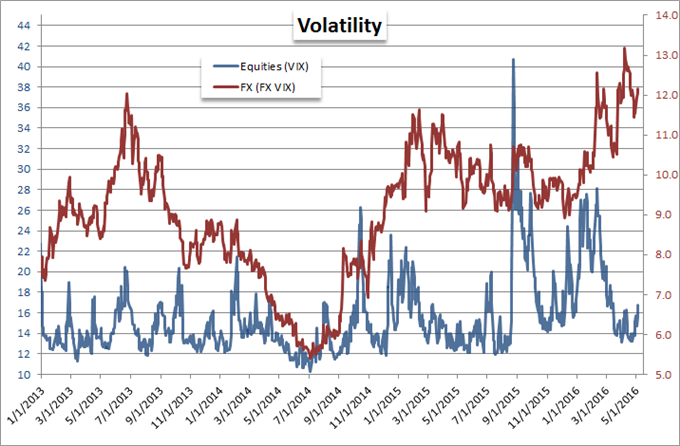 Why are the FX markets seen as being significantly more prone to volatility than its counterparts? There are a few aspects that contribute to this. One structural consideration is that there is much less of the directional bias in volatility measure for the FX market than there is for other capital markets. There isn’t a traditional buy-and-hold view for currency markets as we are long one currency and short another by virtue of exposure. That said, speculative appetite doesn’t curb readings as readily and it more directly reflects actual activity levels. 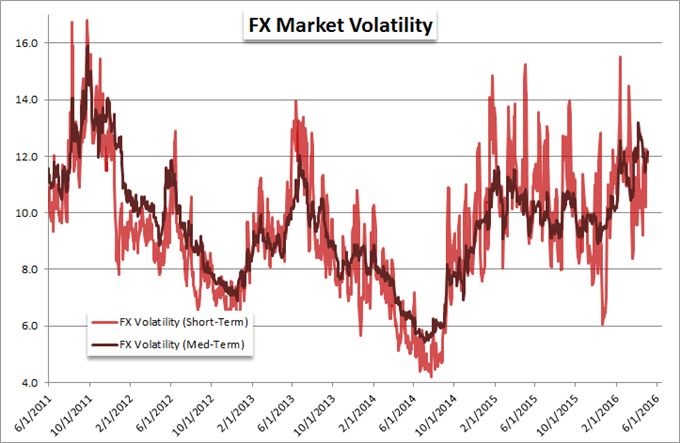 Another characteristic of the FX market that contributes to higher volatility levels is the direct influence of completive monetary policy regimes. In a world of generally accommodative monetary policy and artificially augmented risk appetite, there is a common reach for yield with a complacency around the risks the exposure represents. However, in FX, we pit these regimes against each other. And, the competitive effort to implement policy that alters currency value – some would say ‘currency war’ – reflects a destabilizing element. 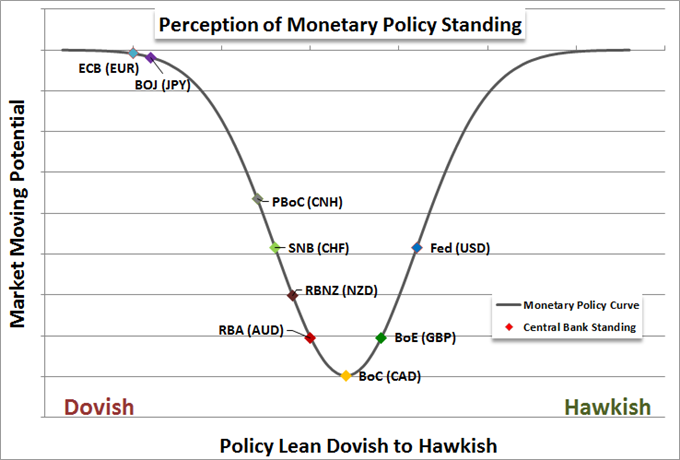 Competitive monetary policy has long ago shown strain through exchange rates with dramatic moves from the likes of USDJPY and the Yen crosses, the Swiss Franc after the SNB’s policy failure, a Dollar rally after the Fed took a small step to normalize and the Euro’s plunge as the ECB played catch up with its own QE program. The realized – rather than expected – volatility impact this has had in currency markets has been profound. The visualization is below. Yet, the influence this carries is not isolated to FX. The fallout of competition in these regimes and the ultimate limitation of global easing is quickly becoming a popular concern across the market. So, should we be soothed by relatively low volatility readings or concerned by the complacency that it may represent? 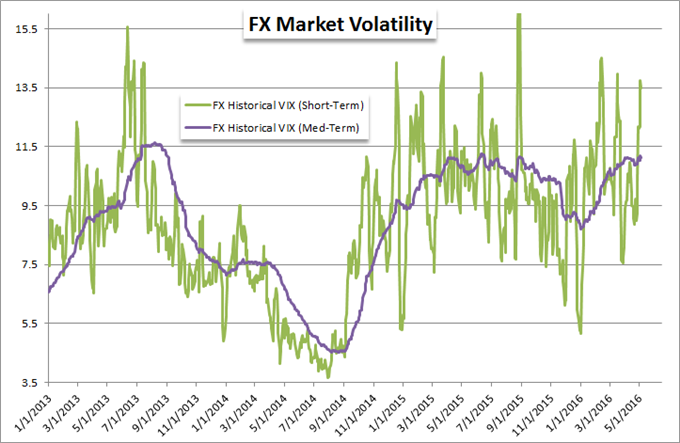 Compare how retail speculators are positioning in US Oil relative to USDCAD to see if there is shifting current using the FXCM Speculative Sentiment Index (SSI) data on DailyFX.