Data provided by
News
Nasdaq 100 Skips Up Despite Fed Chair Powell’s Red-Hot Hawkishness. Where To for Tech?
Japanese Yen Trades Range Against the US Dollar But Lifts Against the Swiss Franc.
More View more
Real Time News 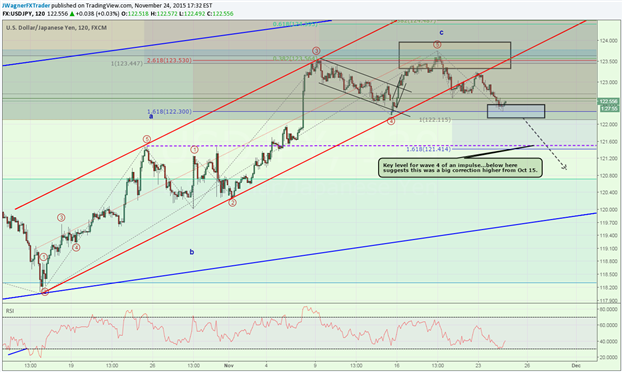 -Bears can sell rallies in anticipation of a 118 retest

-Bulls can use 121.50 as their invalidation point to wave 5 of an impulse

The USD/JPY technical pattern has caught my eye lately. A drop below 121.50 seals the October 15-November 18 trend as a three wave move which is significant for bears. However, the current price level could support a pivot higher so bulls have a good risk to reward ratio opportunity. From near current price levels, the USDJPY should tip its hand to us as to which pattern likely plays out.

Today, we will assess the bearish and bullish Elliott Wave possibilities that are potentially developing.

As we can see in the chart above, we have two clear 5 wave moves higher (red circle waves) that are nearly equal in length. The internal sub-waves conformed to several guidelines.

Most importantly, the pivot on November 18 took place right in the zone of the confluence of wave measurements.

Under this interpretation, 121.50 is the key level to watch. If prices break below 121.50, then it seals the October 15 up trend as a 3 wave move. According to Elliott Wave Theory, 3 wave moves take place in the corrective position OR in the ending diagonal patterns. If 121.50 breaks, we are leaning towards an eventual retest of 118.10

The bullish pattern we are watching is that this current dip is a smaller degree wave iv. 121.50 becomes the price level that if broken, invalidates this impulsive pattern. 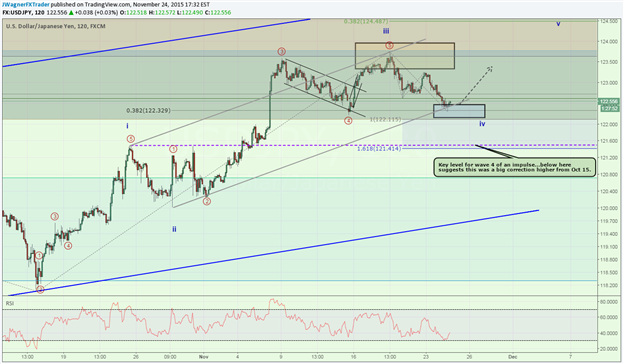 Typically, wave iv’s will retrace approximately 38.2% of wave iii. In this case, today’s low of 122.31 may be the end of wave iv. Additionally, you’ll see on the chart above how the grey line also intersects in this same price zone.

Lastly, in looking for alternation with the proposed wave ii, which means we can anticipate a triangle or flat pattern developing. Either way, prices are likely to retest the 123.75 high in the coming days under this pattern and possibly higher.

Once the wave iv finishes, we can then anticipate a wave v through a couple of measurements. Since neither wave i or iii was extended, we can anticipate v to be larger than iii. Wave iii is about 350 pips, so wave 5 could travel 350-550 pips which targets 125.80. The 61.8% of waves i-iii also appears in the 125.80 zone. If prices reach this level, a reaction lower is likely.

Regardless of how you decide to trade USD/JPY, consider this one simple technique that when implemented, 53% of the traders turned a profit; of those who didn’t, only 17% turned a profit. Read pages 7-9 of the Traits of Successful Traders Guide to discover this technique. [Free registration required]