If you lived in the United States before the year 2000, the thought of yellow and orange-jacketed traders screaming at the top of their lungs across a rainbow of other-colored jackets, slips of paper flying everywhere, is probably something you associate with markets and exchanges. These stressful environments were synonymous with the notion of markets. Emotions ran high, and depending on the exchange – one may even be risking their own personal safety by entering ‘the floor.’

Times have changed quite a bit; many exchanges exist only in cyberspace, no longer seeing the need for physical manifestations of their trading activity. Even the New York Stock Exchange; have you seen it lately? If not, just turn on CNBC, it's not like it used to be (quite a bit more quiet these days).

But one thing that hasn’t changed is the fact that people love fast markets. Only now they mostly exist through the Internet, and now they are available to anyone willing to risk their money – not only the select few that could afford or draw on family connections for a ‘seat on the floor.’

When a big news event happens; or even perhaps a news event driven by an economic catalyst, like the 2008 Financial Collapse, markets can attempt to price in the newest data so fast that prices move at breakneck speeds. For the poor investors that are in long positions in mutual funds, the hope of stemming the bleeding before market close doesn't exist. They have to wait and watch the devastation until the end of the trading day so that they redeem out of their mutual funds.

But to the trader that can take a short position just as quickly as ‘hitting the bid,’ these ‘panic’ periods present quite a bit of opportunity. Prices are moving fast and pips can stack up quickly – if you are on the right side of the trade. The big question is if this is something that fits in your trading plan?

What type of trader are you?

The alternative approach is the trader that analyzes those same past events, looking to avoid those fundamental catalysts, hoping that the technical levels from the past hold true (the technical-range trader).

That’s really all there is. A pure fundamentals trader wouldn’t be looking at charts at all, and a ‘technical-breakout/trend’ trader would really be, in many ways, looking to fundamentals to continue substantiation of those trending/breakout conditions, so they wouldn’t really be a ‘pure technical’ trader.

Considering the fact that ‘panic’ markets can create rapid price movements in a short period of time, which can just as easily work against the trader as it can for them, it behooves one to know as much about their risk profile before wagering their hard-earned capital.

So, if you consider yourself a ‘pure technical’ trader, and have no interest whatsoever in following or keeping up with the news – I advise you to attempt to avoid panic markets. This can often be done by setting stops at major levels of support (or resistance in the case of short positions) so that when we do get those big breakouts – they don’t work against you too heavily.

For all those that dare to tread in fast markets – read on; and we will share with you some ways that experienced traders approach these volatile scenarios.

How to Trade Fast Markets

The same question was broached in the article ‘How to Trade Forex Majors Like the Euro during Active Hours,’ and the recommendation to trade breakout strategies could not be more on point.

As David shows in the article, increased activity often means larger and potentially more erratic price movements. And because these movements can be more erratic, it can greatly affect the trader’s ability to forecast price changes. The chart below, taken from the aforementioned article, shows how widely price swings can magnify on EURUSD during the London and the London/US overlap session (often considered the most ‘active’ period in the FX market). 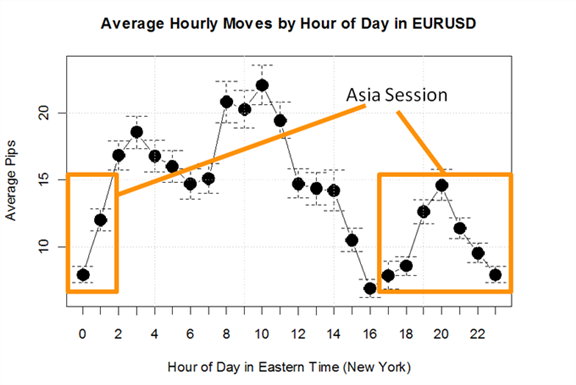 Prepared by David Rodriguez, from Here is How to Trade Forex Majors Like Euro During Active Hours

Why trade breakouts to address panic?

Because price movements can become greatly magnified while also becoming more erratic is the reason why trading breakouts is the best prescription for handling volatility. If we happen to be on the right side of the movement, price can trend for a continued period of time, giving us far greater potential profit targets if we are right. If we’re on the wrong side of the movement (which will probably happen more than half of the time), then we can cut our losses early before the pair continues against us in a move that could potentially drain our accounts.

This is what can allow rampant volatility to actually work in your favor.

But what if the trader above was only right on one out of five trades? Well, they are still looking at a net profit (once again, not including spreads, slippage, etc). One winning trade at 100 pips only gives up 80 to 4 losers at 20 pips each, leaving a net profit of 20 pips; and that is with a winning ratio of 20%.

An easy way of looking at breakout strategies is to simply think of ranges – and then reverse it.

While range-traders look to buy support and sell resistance, breakout traders await breaks of resistance to buy (in anticipation of price continuing to rise now that resistance is broken) and looking to sell when support is breached (once again, looking for price to continue heading lower).

There are numerous ways of identifying support and resistance levels to be used for breakout strategies. Some traders don’t even use indicators, electing, instead, to simply analyze and build their strategies off of price, and price action. Some traders rather use strategies based on indicators like Price Channels to point out these support and resistance levels. Many of the various Pivot Point offerings or Fibonacci studies can help in this same regard as well.

Whatever the mechanism, it is important to realize that complete elimination of false breakouts is totally impossible. What often makes or breaks a breakout strategy is money, risk, and trade management.

This is a hazard sport, as it can be a regular occurrence for price to break support (or resistance) briefly enough to trigger our, only to pop back into its prior range. This can be frustrating for breakout traders, and has even earned the title of the ‘false breakout.’

This topic was explored in greater detail by Walker England in the article ‘Can False Breakouts be Prevented?’

Not to spoil the article, which you should absolutely read, but the answer to the question is ‘No.’ False breakouts, unfortunately, cannot be prevented.

To the trader looking to be more conservative, additional ‘wiggle room’ can be given to the entry in an effort to attempt to decrease the chances of caught by a false breakout.

But preventing false breakouts is impossible due to the simple fact that no trader in the world knows what will happen next. So when trading panic markets, protect your trade, protect your account, and trade your plan.