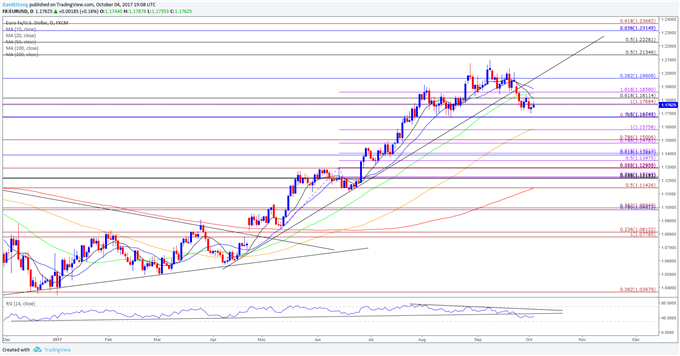 EUR/USD Outlook Mired Ahead of NFP Amid Mixed ECB Rhetoric

EUR/USD remains at risk of facing a larger correction ahead of the next European Central Bank (ECB) meeting on October 26 as the pair fails to retain the bullish trend from earlier this year.

With U.S. Non-Farm Payrolls (NFP) projected to increase another 80K in September, the ongoing improvement in the labor market may keep the Federal Open Market Committee (FOMC) on course to deliver three rate-hikes in 2017 as Chair Janet Yellen and Co. anticipate to achieve the 2% inflation-target over the policy horizon. In turn, a positive development may spur fresh monthly lows in EUR/USD as it boosts the outlook for growth and inflation.

At the same time, recent rhetoric from ECB officials suggest the central bank is in no rush to taper its quantitative easing (QE) program as board member Peter Praet warns the asset-purchase program may run beyond the December deadline. As a result, the ECB may continue to expand its balance sheet in 2018, but President Mario Draghi and Co. may reveal a more detailed exit strategy over the coming months as ‘the economic expansion, which accelerated more than expected in the first half of 2017, continues to be solid and broad-based across countries and sectors.’ With that said, EUR/USD stands at risk of facing near-term headwinds, but the broader shift in market behavior may continue to take shape over the coming months as the ECB shows a greater willingness to gradually move away from its easing-cycle.

EUR/USD remains at risk for a larger correction followed the failed attempt to test the 1.2130 (50% retracement) hurdle as both price and the Relative Strength Index (RSI) snap the bullish formations from earlier this year. A break/close below the 1.1670 (50% retracement) region raises the risk for a move back towards 1.1580 (100% expansion), but failure to test the August-low (1.1662) may spur range-bound conditions, with the near-term outlook capped by the former-support zone around 1.1860 (161.8% expansion). 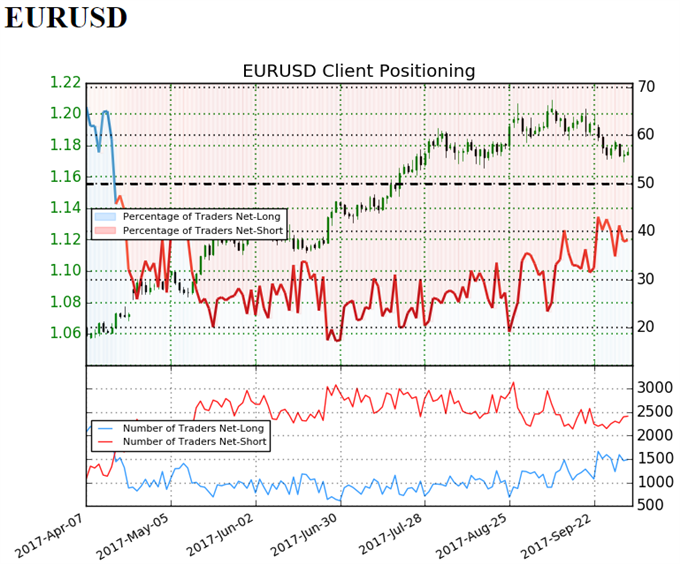