Between Seasonal Expectations and Structural Threats

The new trading week opened to a marked contrast in performance for the S&P 500 and risk leaning assets relative to how we closed out Friday’s session. Last week saw the benchmark US index – one of my preferred proxies for ‘risk trends’ – post its biggest single-day rally (3.1 percent) in 25 months. That move would notably drive the market back above the official tipping point designating a ‘bear market’ earlier in the month. We won’t return to a technical ‘bull market’ for a while given the definition is a 20 percent rally from an important cyclical low. For me, the prevailing trend remains bearish and this is merely a correction to the dominant move. While the SPX is one of my must-watch measures, the Dow Jones Industrial Average represents the next speculative trigger in my book with its own bear market milestone (29,562) the point at which ‘value’ falls. In the meantime, we are well off that critical support, but Monday’s utter lack of follow through – the day’s range was the smallest as a percentage of spot since February 8th – puts the focus on short-term chop higher or predicable accelerants to restore the dominant bearish trend. 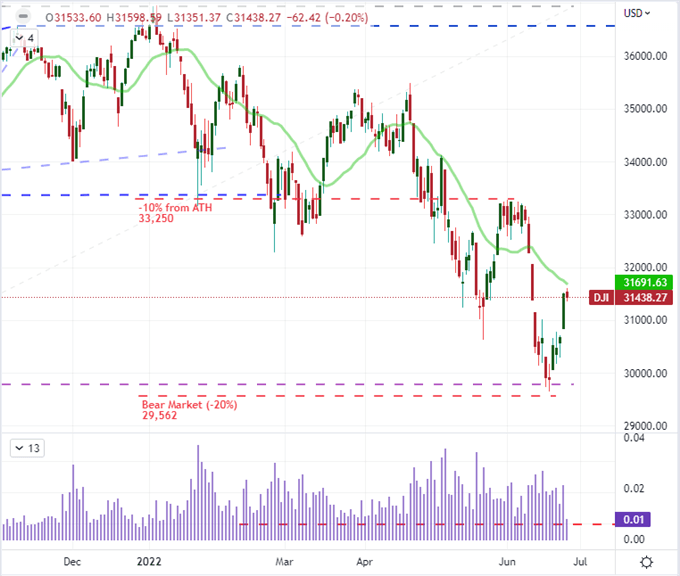 On the fundamental side of the markets, there is plenty to put the bears back in charge from restrictive monetary policy to uncontrolled recession risks. What’s more, there is plenty of high profile data and general event risk which could charge sentiment to life. It is further worth reiterating the uneven financial backdrop that we are dealing with as unpredictable developments such as Russia supposed first sovereign default (according to the White House) since 1918 finds volatility conditions (VVIX) pushing pre-pandemic lows once again while credit conditions show pressure not seen in similar historical context. In direct contrast to this reasonable fear, we have the more prosaic assumptions of seasonality. Historically, the 26th week of the year is one of the most restrained periods of activity of the entire year – with the 27th representing the record trough. We are heading into the unofficial start of the ‘summer doldrums’ in other words. Is there enough to keep markets anchored or is ‘this time different’? 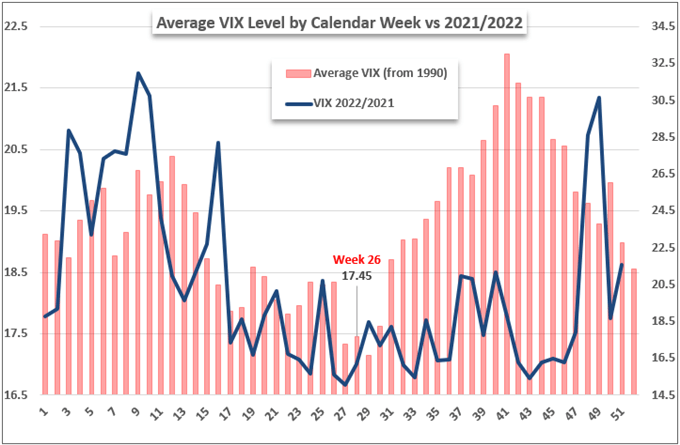 Chart Created by John Kicklighter with Data from

The Fundamental Drivers that Matter for Traders and Investors

While I will continue to monitor for ‘grey swans’ (known but improbable threats to systemic stability), it is more productive to follow the event risk and themes that are more reliable in their release calendar. While it is not the top my list for systemic influence, monetary policy remains a key current for a market struggling to keep its footing. The ECB Forum on Central Banking is worth watching closely given the extreme state of interest rate forecasts and the growing disparity in policies such as that between the Fed and the ECB or PBOC. I’ll note that the market is pricing in a 94 percent probability of another 75bp rate hike on July 27th, though the risk of yet another three-quarters of a percent increase on September 21st is a relatively chaste 30 percent. Rate speculation is influence, but it is also dependent on key data that will fuel market adjustment to those views. In the meantime, fears over ‘recession’ seem far more pressing. I’ll once again reference the Google search interest around ‘Recession’ which beats out interest in bear markets and earnings. That is not a good position to be in. 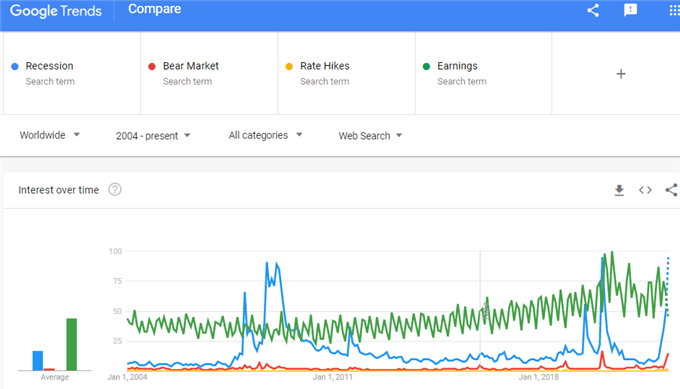 For measures of economic potential of support, the G7 meeting in Germany is considered an opportunity for governments to coordinate their efforts to spur growth. Thus far, the commitment to further isolate Russia for its invasion of Ukraine does little to bolster economic expansion. On the other hand, the $600 billion in infrastructure announced by US President Biden may help turn the tide against protectionism and balance out the gains China has made as a major investing nation in the world. While I am monitoring the data, market measures remain far more interesting for me. The US 2-10 spread is one such pressure gauge, but commodities are gaining more attention. Crude oil and other energy products have been the focal point for the past few months, but there is less and less a one-sided supply explanation to the retreat in prices. As the outlook darkens and the possibility of economic contraction rises, a drop in demand can pull the markets lower just as aggressively. It’s worth noting that prices like crude oil can be manipulated by OPEC while food inflation prices don’t’ really see a material demand change. That said, copper (and other industrial metals) and cotton (along with other ‘softs) are very prone to economic fluctuations – and both have dropped sharply. 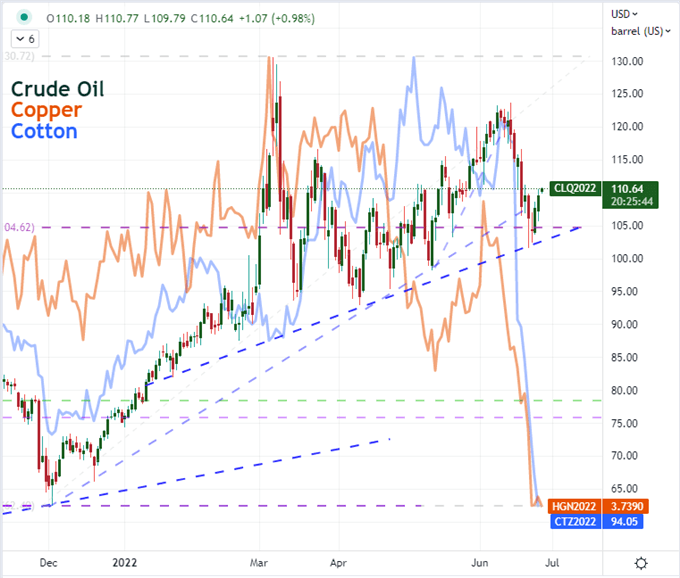 The Dollar Break Ahead

Between the Dow and the Dollar, I believe the former is more likely to force a near-term break (bullish or bearish). That is owing to just how narrow its trading range is not to mention the long line of fundamental catalysts the delve directly into risk trends. Nonetheless, the Greenback should be on the watch list. Interest rate expectations are still active, but the premium seems to be heavily priced in for the Fed through year’s end. As for the Greenback’s safe haven status, I don’t believe the tension is high enough to see the market default back to the ‘last resort’ currency. From EURUSD, relative rate expectations and growth are my top concerns with a narrow range – between 1.0635 to 1.0500 – reflecting a prime jump points for a swell in activity. 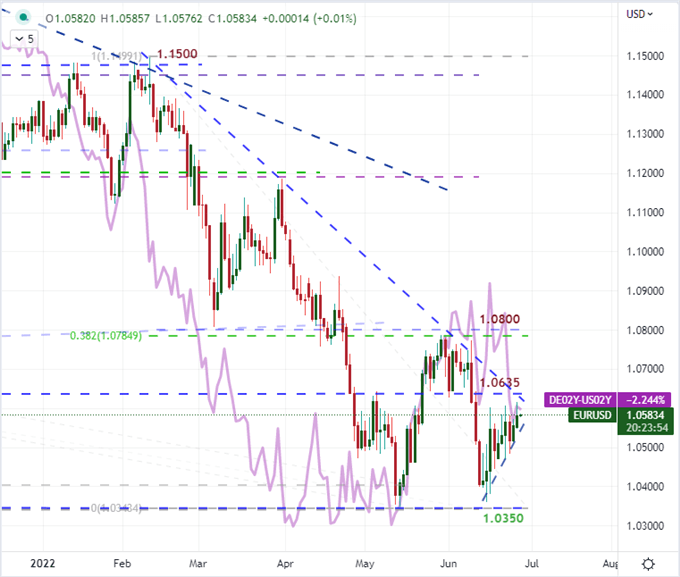 Speaking of a stretched interest rate expectations plot, the contrast between the Fed’s and Bank of Japan’s (BOJ) policy courses doesn’t seem if it could grow any wider. The US authority has pushed rate speculation in Fed Fund futures up to 3.47 percent by year’s end, while the BOJ is expected to be unmoving. That differential is priced in, but it nevertheless keeps the favor in Dollar’s court. That being said, the pressures of inflation are unrelenting – now even in Japan – and the Ministry of Finance (MOF) is standing in the wings ready to address the ills of a rapidly depreciating local currency if need be. 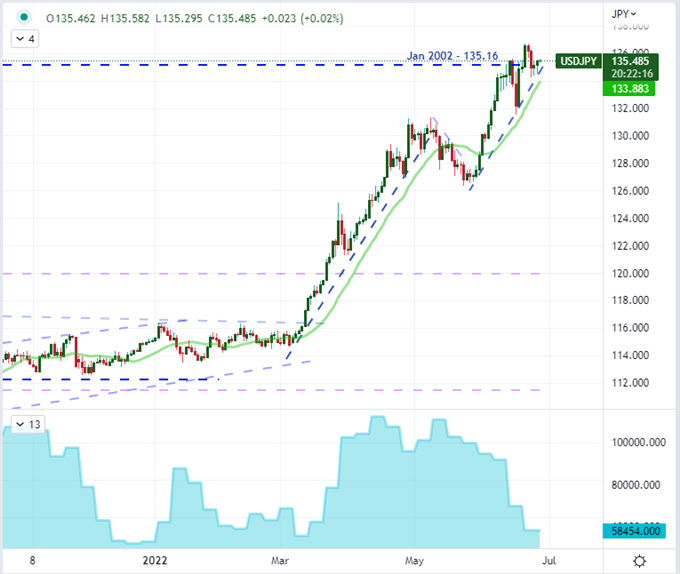 For top event risk over the coming 24 hours, the G7 is perhaps the top possible event risk as an unexpected outcome here could have deep global ramifications. Nothing earthshattering is expected after the Ukraine and infrastructure investment plans were announced, but don’t write off the an event with this level of scop. Meanwhile, both the ECB forum and the NATO summit are worth watching for their policy implications for global policy stability. For discrete event risk, the US seems loaded with the US Conference Board consumer sentiment report a top listing for me. 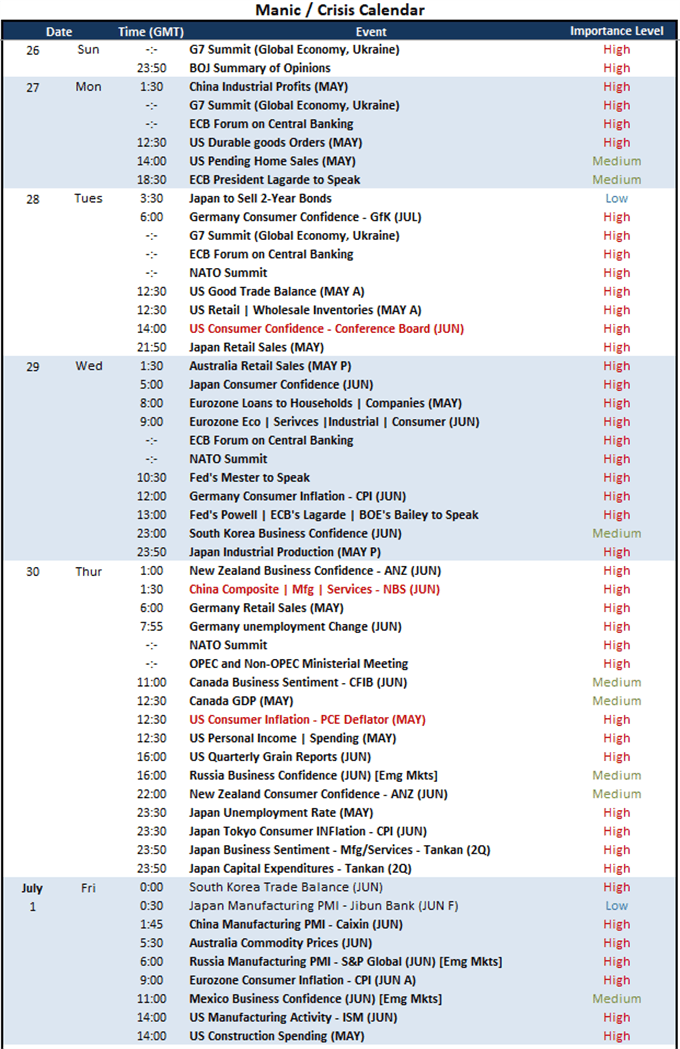