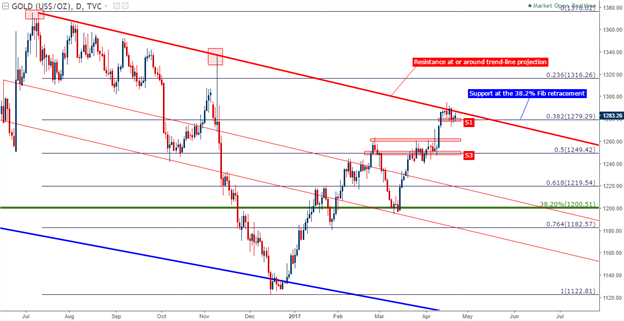 In our last article, we looked at the recent trend-line inflection after Gold prices shot-higher on the heels of the Federal Reserve’s March rate hike. This trend-line can be found by connecting the July high to the November ‘election spike’ in Gold prices; and the projection of that trend-line has helped to cap the advance that began in mid-March. But sellers haven’t had a free line here, as price action has continued to find support around the ‘S1’ zone that we’ve been watching, which is the 38.2% Fibonacci retracement from the major move of last July’s high down to December’s low.

With the first round of French elections set to take place on Sunday, there’s a logical reason for this continued banter between support and resistance in Gold prices. Likely, we’ll see Gold prices move with the results of this weekend’s election. Should either Jean-Luc Melanchon or Marine Le Pen make it into the next round, this can be seen as heightened geopolitical risk out of Europe, which will likely bring with it an extension of the up-trend in Gold prices. However, if we get a second round with Emmanuel Macron and Francois Fillon, that fear might take a back seat as fears of ‘bigger issues’ in Europe recede; and this could further allay those themes of geopolitical pressure that became prominent in early-April.

On the chart below, we’re looking at four different support levels with Gold prices (we’ve added a level at $1,270.94 since our last article), and these can be usable on either side of the trade. For bulls, these ‘zones’ could be areas for potential stop placement based on how much distance one might want to give to the trade. For bears, these zones can be targets for short-side positions. For those that aren’t sure or don’t have a bias or directional stance, waiting for next week’s open could be a very cogent approach given the potential for volatility around this weekend’s elections. 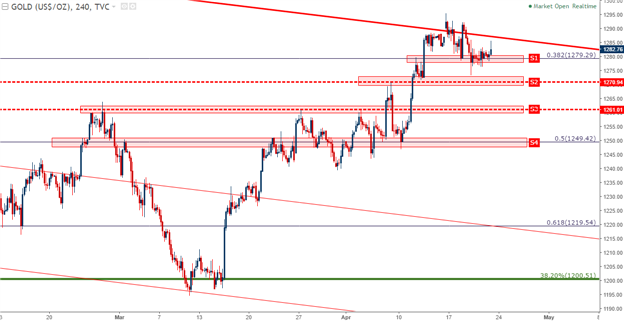