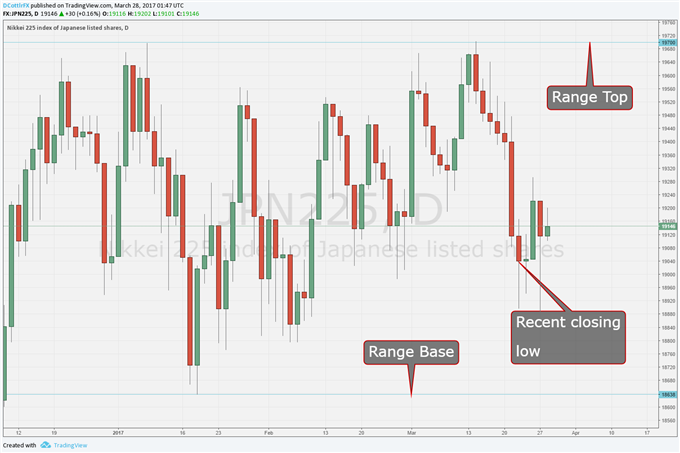 Perhaps you’re familiar with the tale of the tourist asking directions in rural Ireland only to be told by a local, “well, to be honest, I wouldn’t start from here.” Trying to predict the Nikkei 225’s near-term direction from a technical perspective right now will give you a sense of how that tourist must have felt.

Because of course, like that traveler, we must start from here. But “here,” in Nikkei terms, is just about bang in the middle of a trading range which has held since December 8, 2016. So, from current levels that range offers us just about as much upside potential as downside. Very helpful.

The Japanese equity benchmark has been fluctuating in a wide, 1000-point-or-so band ever since it pushed up through the current range base – 18638 – on that date. The top of the range is the peak of the long climb up from November’s lows, hit in early January. There’ve now been five attempts at that top (19700). They’ve all failed but, by the same token, the range base has also gone unthreatened.

Bulls might point out that the index has spent most of the period in question quite well above current levels. Bears might counter that the trendline break we saw to the downside last week has not been rejected, even if the index remains maddeningly within striking distance of undoing that damage.

What we can say is that if those bulls are going to regain lost momentum they had probably better do it soon. If the index can’t close materially higher than it is now, then the recent closing low, last Wednesday’s 19040 will come back into play.

If that too were to fail we might be looking at a test lower, even if that range bottom is not yet seriously threatened. Clear support to the downside is scant though. The closing level of February 6 and 7 at 18849, and the close of January 17 and 18 at 18725 are likely candidates, but they are both some way below where the index is now.

Stuck in the middle with the Nikkei

What do other traders think about your favorite asset? The DailyFX Sentiment Page will give you a clue.