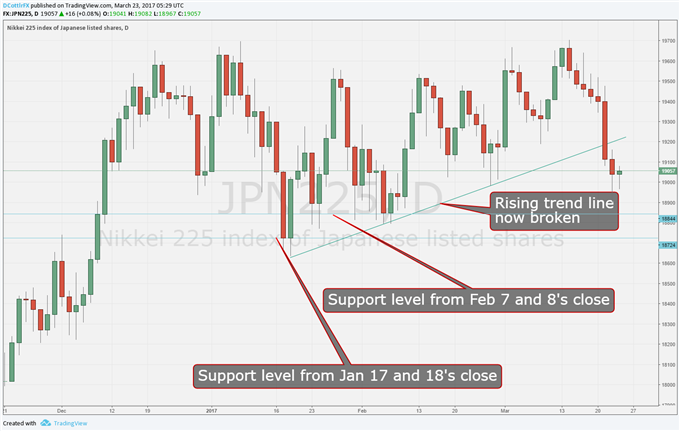 Like many developed-market stock indexes, the Nikkei 225 has spent this year doing – well – not very much of anything. But that could be about to change, and not in a way bulls will like at all.

The index reached a significant intraday top of 19,686 on January 9. That was the peak so far of its long climb from the lows of autumn 2016, when the world was hunkering down for that US presidential election result.

But since January 9, the Nikkei has meandered around that top, providing sufficient peaks and troughs to keep the short-term traders in business but not really moving very far. However, that was until this week when something potentially significant occurred. Tuesday was a miserable day for stocks everywhere as Wall Street swooned. It was certainly poor for the Nikkei. It dropped to its lowest closing point since late February, then did so again on Wednesday.

In the process, it also managed to close below a moderate rising trend line. That line had been in place since January 18, but it gave way when the index slid through 19,178 on Tuesday. The Nikkei went on to close even further below it at 19,117.

It was a modest uptrend, but it’s broken. The Nikkei 225.

The bulls’ primary immediate objective must be to at least recapture that line, which now forms a resistance level at 19,208. However, they don’t seem able to do the deed, or even try very wholeheartedly. The index is now a good way below it at 19,062. That said, all it might take is a sudden Wall Street snap back to put a Nikkei rebound very much in play, but there hasn’t been much sign of that so far.

If the uptrend cannot be re-taken on a closing basis then likely support levels are some way down. They almost must be when rising trend-lines give way. Props will come in at February 7 and 8’s closing low of 11,850, with January 17 and 18’s closures in the 18,729 area lying in wait if those break.

Those will be the levels which bulls must give their all to defend. If they can’t, the way further down will be open.

There’s not much of the year’s first quarter left. How are the DailyFX analysts’ forecasts holding up?