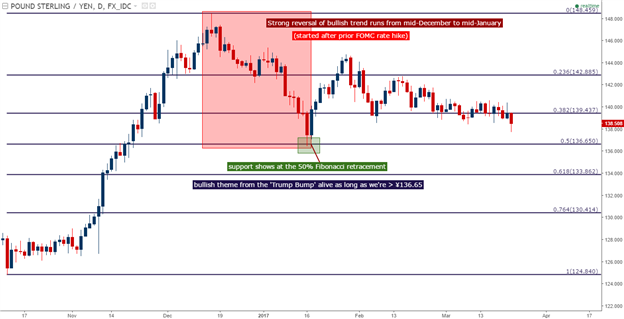 In our last article, we looked at the continued congestion in GBP/JPY as the next directional move had continued to prove elusive. And a week later, we have little additional information that would indicate that the next directional move is afoot. While the pair was previously driven-lower with weakness around the British Pound from a combination of a) a dovish Bank of England and b) little hope for that changing as long as inflation remained subdued; more recently we’ve had a re-emergence of Yen-strength as risk tolerance has waned after last week’s rate hike from the Federal Reserve.

Taken from the ‘Trump Bump’, price action in GBP/JPY is still bullish in nature as we’re above the 50% Fibonacci retracement of the most recent major move on the Daily chart. This level comes in at ¥136.65 – and notice how this level caught the bottom of an aggressive retracement in December and January. After this support level came into-play, the bulls returned and the up-trend around the ‘Trump Bump’ remained alive.

After that support inflection came-in, it looked as though bulls were ready to re-take control; and they did, for approximately 800 pips. But that strength couldn’t last long enough to set a new high, as sellers returned to produce a ‘lower-high’ as shown on the 4-hour chart below: 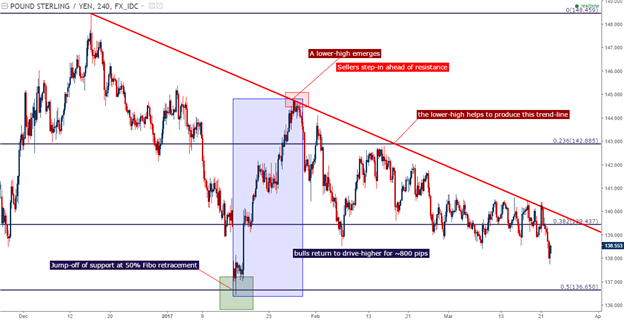 So, the net of the two above charts is a bigger picture up-trend with a shorter-term bearish move as a retracement of that up-trend. The complication arises when we look at how supply and demand has shifted as GBP/JPY has traded at or near fresh short-term lows. Frankly, each new low has seen bears dry up while bulls bring price action back. There has been a dearth of bearish directional movement whilst below support; and this makes the under-side of GBP/JPY unattractive for momentum-based strategies. 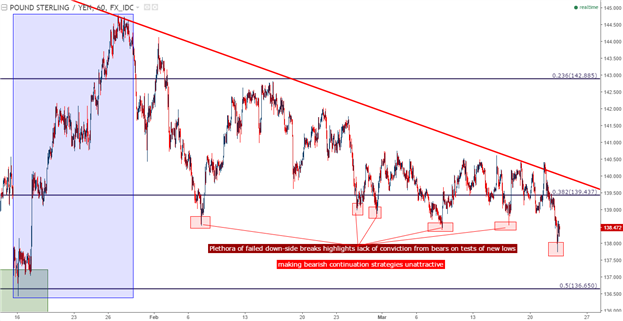 The primary issue with the under-side of GBP/JPY price action at the moment is a lack of seller conviction after new lows have been made. This can be indicative of a ‘bigger’ support level lurking below that sellers don’t want to trigger in-front of for fear of catching a bullish reversal. So the net setup would be a type of a descending wedge with an under-tested area of support. But we can apply the same logic: Using a break below this key long-term support level at 163.65 to open the door for bearish strategies; and a top-side break above the descending trend-line (which is also confluent with swing-high resistance) to open the door for bullish continuation strategies: 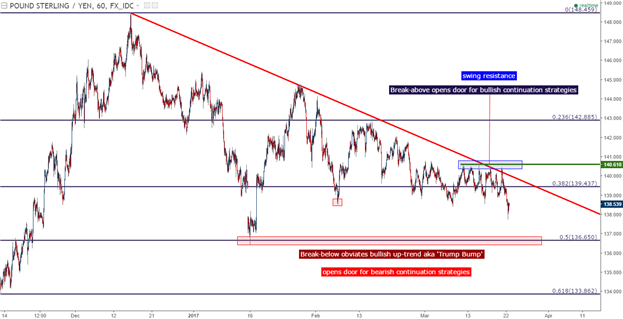