The Elliott Wave 4 pullback in USDCAD found support at the end of August 2017 that coincided with a longer-term trend line, in orange on the weekly chart below. This bearish pullback was indeed quite deep and tested the Red probability pullback zone offering a better risk to reward ratio (if support is held) of reaching the Elliott 5th Wave target in Blue around 1.5500.

This USDCAD currency pair has been in a bullish channel since the Wave 4 lows but is now approaching strong resistance around 1.3588 and then a little higher at 1.3790. These hurdles need to be crossed before the longer-term Bullish 5th wave move has real potential. On the positive side, this bullish trend channel, seen in green on the weekly chart below, has been respected very well for the past 19 months. Below this weekly chart lets discuss the daily chart. 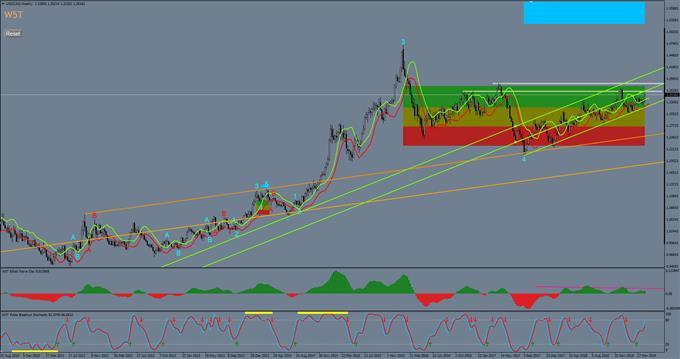 Using the daily time frame chart below to look a little closer look at this 19-month bullish channel. Although it is clearly a bullish trend, it has been a corrective bullish move with equal moves up and down with a bullish bias. This bullish bias can be seen over the last 12 months with the false breakout bars being present in the overbought zone of the stochastic on the chart below. Since the beginning of 2019 the stochastic has even failed to enter back into the oversold zone, with higher crossing points of the %K and %D lines, indicating strong bullish momentum.

Observations on the Elliott Wave Oscillator shows lower crowning on the green bullish moves, indicating oscillator divergence during this bullish channel move. This could indicate, the move is running out of momentum to the upside and together with these two linear resistance levels looming, a potential bearish ABC correction is a possibility.

A break of the Stochastic divergence could signal the start of the bearish correction. But if we gain another false breakout bar in the oversold zone and the Oscillator divergence is broken with a higher crowing. Then a breakout, up through resistance is a strong possibility.

A critical period over the next two weeks for this USDCAD currency pair with traders looking at both scenarios very closely. (Learn more about the MT4 Elliott Wave Indicator Suite. 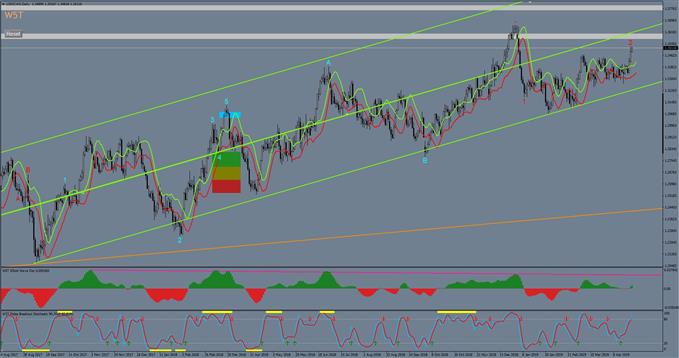 CAD and Oil: The Candadian Dollar and Oil Price Correlation