The USD/JPY is trading above the 102 handle (at the time this report was written) after the pair saw a surge higher following the results of the upper house election in Japan. Prime Minister Shinzo Abe won a supermajority in the chamber, which might imply further easing by the BoJ down the line.

A quiet economic calendar might imply that market focus may still be in digestion mode of the weekend’s Japan elections and Friday’s NFPs. The Significant beat to expectations in the US payroll data saw a surge higher in risk assets that appears to have had follow through when Asian trade opened. Combined with the possibility of further easing measures by the BoJ on the Shinzo Abe win, the USD/JPY saw a surge higher.

Kansas City Fed President Esther George is set to speak at 14:00 GMT and might provide comments regarding the Fed’s rate path. The market didn’t meaningfully pull forward rate hike bets following Friday’s NFPs, which might imply that rate hikes are being priced out on the backdrop of the global environment, which appears likely to be, at least in part, a result of the “Brexit” vote. Any comments by George on rates which clashes with that narrative might see further US Dollar strength. 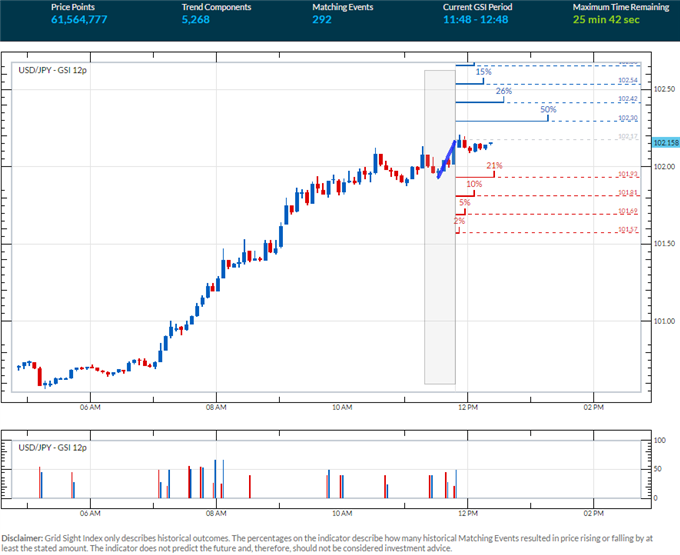 The USD/JPY has managed to break above the 102 handle, and the GSI indicator shows that 50% of similar past momentum events have seen continued upside movements. The GSI indicator calculates the distribution of past event outcomes given certain momentum patterns, and can give you a look at the market in a way that's never been possible before, analyzing millions of historical prices in real time. By matching events in the past, GSI describes how often the price moved in a certain direction.

We use volatility measures as a way to better fit our strategy to market conditions. USD/JPY 1-week implied volatility is at 1.50, the lowest of all major pairs. The figure has seen a significant decline today which could be on the backdrop of the major event risk that are now in the rearview mirror, and the subsequent move higher in ”risky assets”. In turn, this may imply that range bound trades are preferable in the short term. 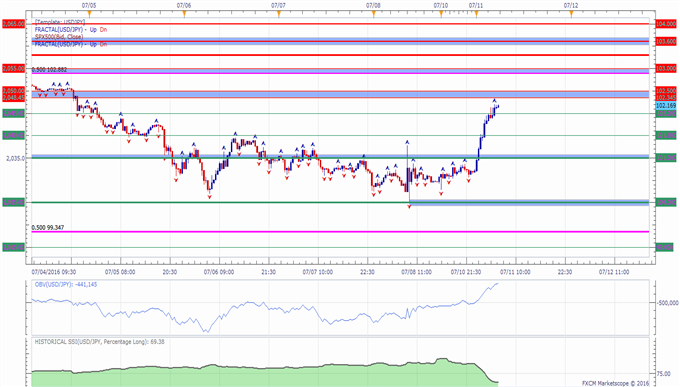 Meanwhile, the DailyFX Speculative Sentiment Index (SSI) is showing that about 69.3% of traders are long the USD/JPY at the time of writing. Retail traders were extremely net long and on the wrong side of the entire down move before hitting an extreme reading of about 84% long this Friday. Longs have been reduced quite substantially following this latest move higher.