Gold Price Plummets as Treasury Yields Soar. Where to Next for Gold?

Gold Price Plummets as Treasury Yields Soar. Where to Next for Gold?

Gold suffered another considerable decline late this week, adding to the string of defeats in recent months as US Treasury yields continue to rise. The weakness in gold price is not entirely unsurprising as we noted the negative correlation between gold and US Treasury yields in our last gold update. Critically, US Treasury yields, in particular the US 10 year Treasury yield, briefly broke above 1.6% Thursday which marked its highest point since mid-February 2020. 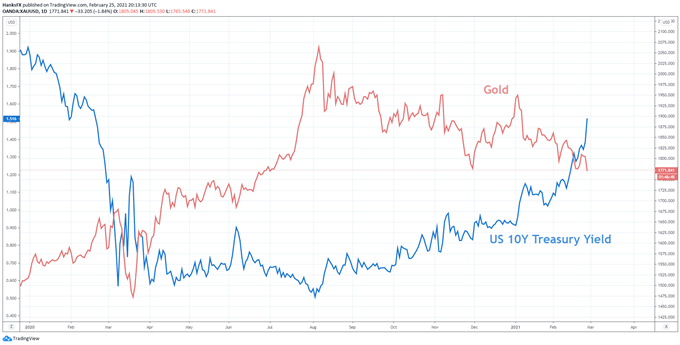 The rapid climb in yields has created an interesting dynamic for investors as they look to manage risk free rates with other investments. As the risk free rate continues to rise, the appeal of some other assets - in this case gold - begins to dwindle.

That said, the risk-reward tradeoff amid rising yields is also pressuring other areas of the market as US equities recede from record levels and the US10Y yield overtakes the S&P 500 dividend yield. Since there is little to suggestUS Treasury yields will suddenly reverse lower, the outlook for gold remains familiarly bearish in my opinion.

With that in mind, we can take a look at the technical landscape. Recent declines have seen gold approach its low in February around the $1,760 mark. As last week's decline saw gold post a lower low from the November 2020 swing low, it would seem the series of lower lows and lower highs is set to continue. Further still, gold has been suffering consistent losses ever since the death cross formation was established when gold traded near $1,860 in early 2021.

Now that gold is nearly $100 lower and support is tantalizingly close to the current trading price, further losses could materialize in the days ahead – although consolidation around support is also possible. In the event of sustained weakness, subsequent support might be derived from the Fibbonaci level around $1,715.

Aside from the Fibbonaci level, support becomes rather sparse at these levels.One area of note is the lower bound of the descending channel that gold has been entrenched in since August. A breach beneath the barrier would seriously undermine the technical landscape and could see losses accelerate.In the meantime, follow @PeterHanksFX on Twitter for updates and analysis.

Should consolidation or a reversal higher occur, initial resistance might reside around $1,800 followed by the 200 day exponential moving average near $1,840. A retreat to resistance might provide opportunity for renewed bearish exposure as risk-reward profiles shift.