Learn how to use politicalrisk analysis in your trading strategy !

The British Pound may rise following the BBC debate between UK Prime Minister Boris Johnson and Leader of the Opposition and head of the Labour Party Jeremy Corbyn. Recent polls showing a widening gap between the Conservatives and their left-wing counterparts has led to a rally in the British Pound. The belief is that if Mr. Johnson is able to secure a majority in parliament, it reduces the probability of a no-deal Brexit. 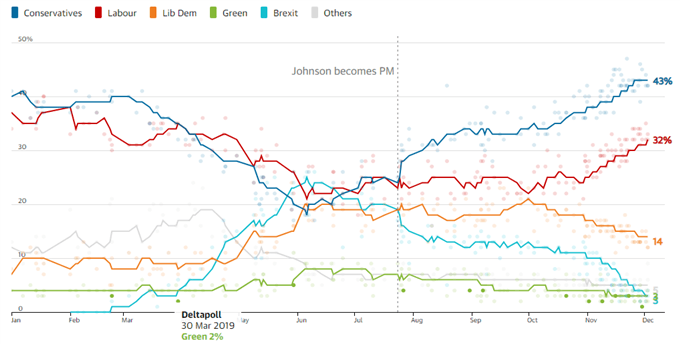 Both party leaders will be going head-to-head on The Prime Ministerial Debate on BBC One on Friday at 8:30 PM local time. This follows the debate both parties held on November 29 where after-show polls showed 51 percent of viewers believed Mr. Johnson outperformed his Labour counterpart. Favorable polls for the Tories have frequently resulted in a stronger Pound as it reduces the chance of the election birthing a split legislature. 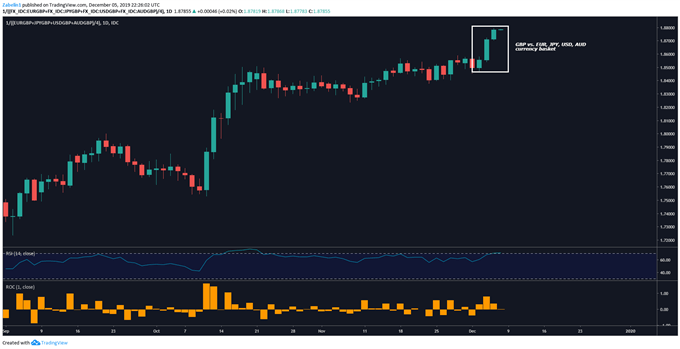 Using a GBP index against a currency basket composed of the Euro, Japanese Yen, US Dollar and Australian Dollar shows that the British Pound has risen almost two percent in three days. The boost has come from optimism about the election and the ability and probability of Mr. Johnson securing a parliamentary majority. Sterling’s fickle nature has been in large part derived from the political oscillations in the UK:

"Performing technical analysis on a pair whose counter currency is linked to a fundamentally volatile environment makes it unusually difficult and unpredictable. There is no telling when a sudden political development will cross the headlines and what the respective magnitude of the price swing will be".

Looking ahead, traders will be closely watching the debate and post-match polls to gauge the degree of popularity Mr. Johnson was able to acquire following the head-to-head interview. Given the current trajectory of polls, it is possible the Prime Minister’s performance will continue to fuel GBP’s gains heading into the election next week on December 12.