The UK and EU have announced a new Brexit deal - effectively taking a no-deal outcome off the table - sending Sterling soaring against a wide range of currencies. GBPUSD touched 1.2990, its highest level since May 13 before news that the DUP will not vote for the deal saw the pair drift back down to the 1.2900 area. The UK Parliament is expected to vote on the deal on Saturday, but the latest commentary is that this may be delayed unless PM Johnson is confident that he can get the deal passed. The DUP continue to oppose the deal and without their votes, and those of some Labour rebels, it will be difficult for PM Johnson to get this deal voted through. Labour leader Jeremy Corbyn has said that the deal is worse than Theresa May's and that he wants a second referendum on this new deal.

On the charts GBPUSD burst through resistance at 1.2838 – 61.8% Fibonacci retracement – with the next target at 1.3177, the May 3 lower high. Above here, a full retracement of the March 13 – September 2 sell-off at 1.3382. While fears that the deal may not be voted through, or even on, Sterling will remain volatile. The ATR indicator is at its highest level in seven months, while the CCI indicator highlights that GBPUSD is heavily overbought. 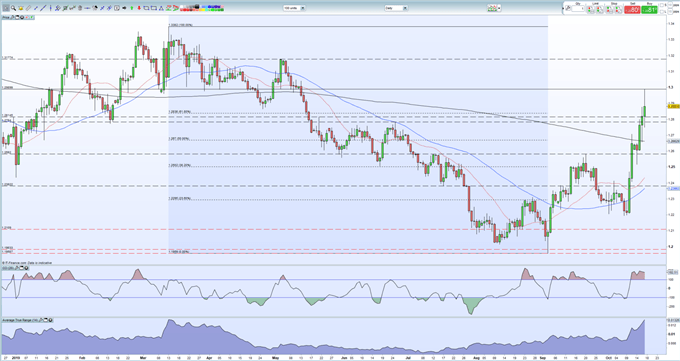 IG Client Sentimentshows that retail traders are 57% net-long GBP/USD, giving us a bearish contrarian bias. However daily and weekly changes give us a bullish bias.