Chinese Stocks Surge Again, Taking Others With Them, ASX Lags

Chinese stocks had leaped by more than 4% by their afternoon on Monday, with the Shanghai Composite index on course for its best day since March 2016.

Investors there were reportedly still cheering the market-supportive commentary, which came from a broad cross-section of Chinese officials in the wake of official growth figures which missed forecasts. Shanghai’s vigor was enough to see Asian stocks higher generally –with the Nikkei 225 up 0.5%- although Australia’s ASX failed to share in the good times.

Politics seems to be weighing that index down. A crucial by-election in the affluent Sydney suburb of Wentworth at the weekend produced a big swing against the ruling Liberal Party which will now lose its parliamentary majority.

Current Prime Minister Scott Morrison only assumed office in August and is himself the sixth PM in just eleven years. That’s a pretty high turnover and speculation has now risen that the next election will produce yet another change. There has to be a vote by May, 2019.

The ASX 200 seems to have settled into a broad daily chart range trade but, having ceded the psychologically crucial 6,000 point earlier this month, is looking rather precarious. 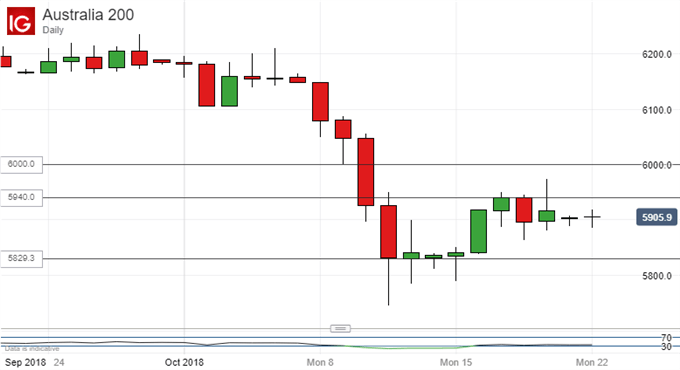 For the moment support in the 5829 region looks safe enough, but the weekly and monthly closing levels to come could offer important clues to the uncommitted.

The US Dollar was higher against both the Euro and Sterling in Asia. Brexit wrangling continues to dog both currencies with the Euro also beset by worries over Italy’s budget, which has drawn heavy criticism from other Eurozone members.

Gold prices held up despite the vigor of Asia Pacific stock markets, with plenty of global uncertainties in play to support the oldest haven. Still, DailyFX Senior Currency Strategist Ilya Spivak cautioned that the current chart setup may not be favorable to the bulls.

Crude oil prices were steady, reportedly as a rising US production-rig count weighed against sanctions against major producer Iran.

The coming session is very light in terms of economic data on tap out of either Europe or North America, with no first-tier numbers or speakers to come.