The ASX 200’s fate could be very closely bound to how it manages to close out this month.

The index has already had a tumultuous October. The start of the month saw it fall below the psychologically crucial 6000 level for the first time since early June. Its four-month sojourn above that point this year is the longest it has managed since the ten-month period it chalked up between March 2007 and June 2008. Should it be unable to regain

While much of the current retreat seems down to global risk aversion rather than anything specific wrong with Australia’s economy or stock market that can be of little comfort to the bulls. Trade war worries and concerns about the effects of rising US interest rates may be sinking all boats and present, but the ASX is having an especially torrid time.

For the moment, falls have been stymied at the 5787.9 level, which is the 76.4% Fibonacci retracement of the rise up from April’s lows to the peaks of August. 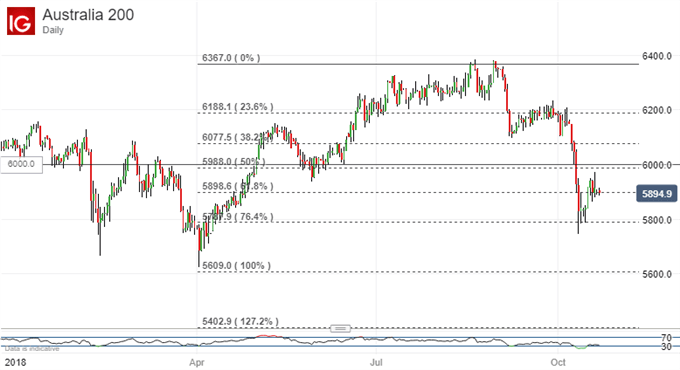 Below that lurks the ignominious 100% retracement at 5609 but let’s be honest. This rally is not going to get back on track again in any meaningful way unless the bulls can retake 6,000 and hold it, which they show little sign of doing anytime soon.

So what makes this month so important? Well, on its monthly chart the ASX is very close to a break below a well-respected uptrend channel which has been in place since February, 2016. It has indeed probed the recesses below that channel this month but still looks set to close within it. As long as it finished October above 5799 the channel will hold, if only barely. 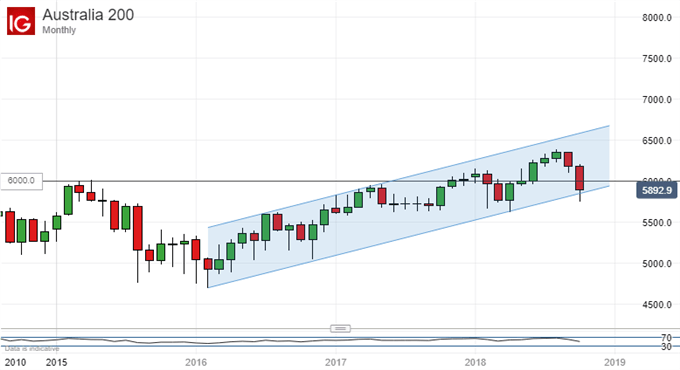 However, even if the bulls do manage to defend this level into November, they will have their work cut out to make the sort of gains that will put the uptrend firmly back on track. Still. Those currently uncommitted might be well-advised to wait and see if they can pull off a defense.

For now, a range seems to be forming on the daily chart between 5829.3 to the downside and 5940 to the top. Short-term directional clues are likely to be given by a break of either.