British Pound Stuck in a Rut as Retail Sales Underwhelm

UK retail sales recovered modestly in February, after falling in January, according to the latest Confederation of British Industry’s quarterly Distributive Trades Survey.

The balance of retailers reporting a year-on-year increase in retail sales volumes rose to +9% year-on-year in the month, beating estimates of +2%, after falling to a four-month low of -8% in January from a 15-month high of +35% in December and from +26% in November, +21% in October and -8% in September.

The data, however, still point to consumers becoming more cautious in their spending as the slump in the Pound post the Brexit vote hits their purchasing power. Ben Jones, principal economist at the CBI, a UK business organisation, which in total speaks for 190,000 businesses, said: “The rebound in retail sales suggests that some of the recent gloom about a slump in consumer demand at the start of 2017 may be overdone.

“However, retailers remain cautious about their prospects, expecting fairly tepid growth in sales volumes next month against a backdrop of rising inflation that is likely to erode households’ purchasing power through the course of the year.

“As the impact of the weaker pound feeds through supply chains, retailers are trying to absorb some of the increase in their import costs through savings.”

The data are unlikely to alter the Bank of England’s extremely accommodative monetary policy. Speaking at the beginning of the week, the bank’s governor, Mark Carney, repeated his message that the bank will continue “looking through” higher inflation due to Pound weakness and not stronger growth until it sees evidence of growing domestic inflationary pressures.

The British Pound remains range bound against its major peers. GBPUSD is up 0.0029 on the day to trade at 1.2487. GBPJPY has risen 0.06 to 141.20. Sterling had looked like it could make significant capital on the political woes facing the Euro, and yesterday EURGBP dropped to a two-month low. Later yesterday, however, the Euro clawed back some ground on the news that two centrist candidates were joining forces in the French presidential election race, thus reducing the chances of the far-right anti-Euro candidate Marine Le Pen. EURGBP is facing less pressure today, dropping 0.0022 to 0.8458. 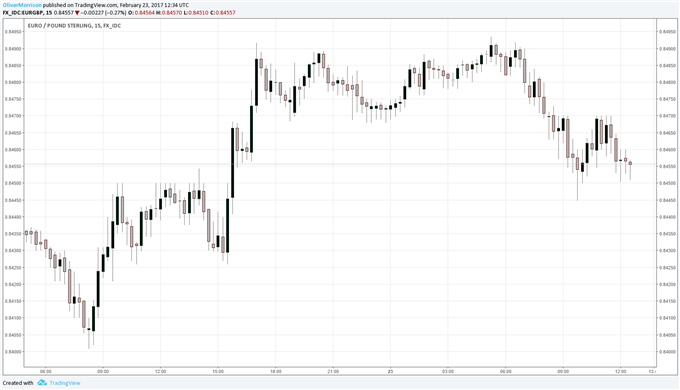