AUD/USD climbs to a fresh weekly high (0.7290) after showing a limited reaction to the Reserve Bank of Australia (RBA) rate decision, and the exchange rate may stage further attempts to test the January high (0.7314) as it carves a fresh series of higher highs and lows.

AUD/USD appears to be unfazed by the RBA’s dovish forward guidance as it clears the February high (0.7284), and it remains to be seen if the update to Australia’s Gross Domestic Product (GDP) report will derail the recent advance in the exchange rate amid expectations for a slowdown in economic activity.

Australia is projected to grow 3.7% after expanding 3.9% during the third quarter of 2021, and indications of a slowing economy may keep the RBA on a preset course as the central bank pledges to “not increase the cash rate until actual inflation is sustainably within the 2 to 3 per cent target range.”

As a result, the advance from the January low (0.6968) may turn out to be a correction in the broader trend with the Federal Reserve on track to normalize monetary policy ahead of its Australian counterpart, but recent price action raises the scope for another run at the January high (0.7314) as it clears the February range.

In turn, AUD/USD may continue to carve a series of higher highs and lows over the coming days if it shows a limited reaction to Australia’s GDP report, and a further appreciation in the exchange rate may fuel the recent flip in retail sentiment like the behavior seen in 2021. 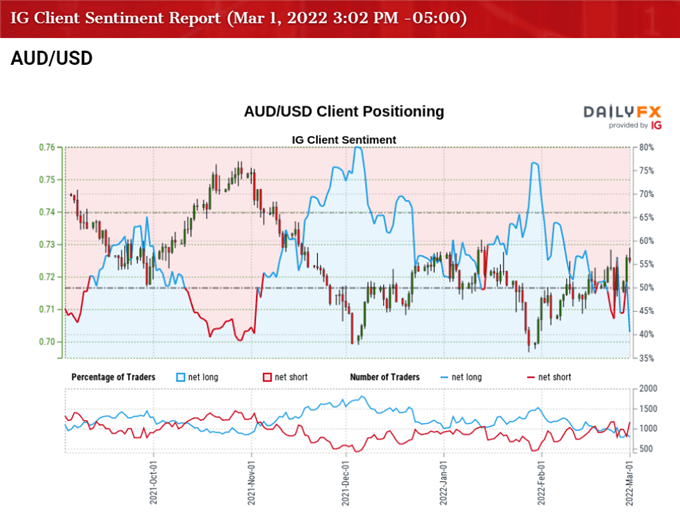 The IG Client Sentiment report shows 37.90% of traders are currently net-long AUD/USD, with the ratio of traders short to long standing at 1.64 to 1.

With that said, AUD/USD may stage further attempts to test the January high (0.7314) after showing a limited reaction to the RBA, but the recovery from the yearly low (0.6968) may turn out to be a correction in the broader trend if it stages another failed attempt to break out of the opening range for 2022. 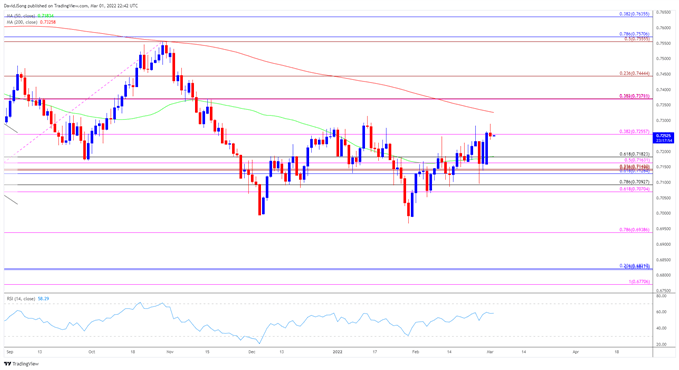