EUR/USD attempts to halt a five day decline as the Federal Reserve sticks to the sidelines, and the exchange rate may stage a larger recovery over the remainder of the month as it appears to be reversing ahead of the yearly low (1.1664).

EUR/USD bounces back from a fresh monthly low (1.1684) as the Federal Open Market Committee (FOMC) retains the current course for monetary policy, and the lack of urgency to taper the quantitative easing (QE) program may continue to produce headwinds for the US Dollar as market participants push out bets for higher interest rates.

Looking ahead, it remains to be seen if the federal election in Germany will sway EUR/USD as the European Central Bank (ECB) plans to carry out “a moderately lower pace of net asset purchases under the pandemic emergency purchase programme (PEPP) than in the previous two quarters,” but it seems as though the Governing Council will continue to utilize its emergency tools throughout the remainder of the year as “there remains some way to go before the damage to the economy caused by the pandemic is overcome.”

As a result, EUR/USD may trade within a defined range ahead of the next ECB meeting on October 28 as it failed to clear the July high (1.1909) earlier this month, but a further rebound in the exchange rate may continue to alleviate the tilt in retail sentiment like the behavior seen during the previous month. 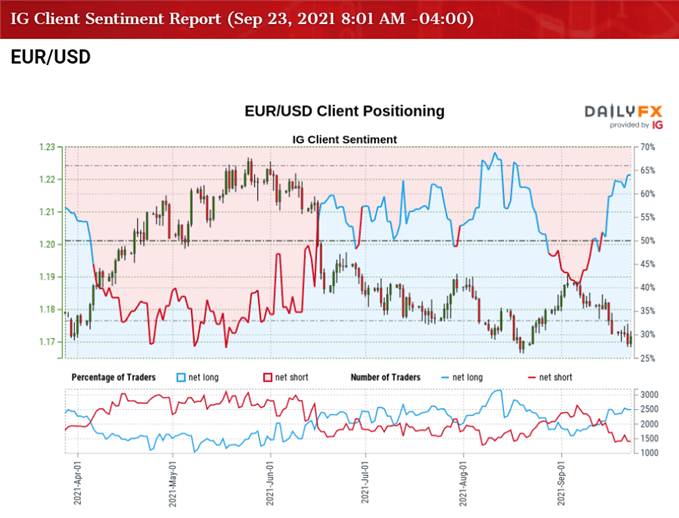 The IG Client Sentiment report shows 60.27% of traders are currently net-long EUR/USD, with the ratio of traders long to short standing at 1.52 to 1.

The number of traders net-long is 4.18% lower than yesterday and 2.57% higher from last week, while the number of traders net-short is 1.63% lower than yesterday and 15.24% lower from last week. The tilt in retail sentiment has eased despite the rise in net-long interest as 61.27% of traders were net-long EUR/USD earlier this week, while the decline in net-short position could be a function of profit taking behavior as the exchange rate bounces back from a fresh monthly low (1.1684).

With that said, lack of momentum to test the yearly low (1.1664) may generate a larger rebound in EUR/USD as it attempts to halt a five day decline, but the exchange rate may trade within a defined range over the near-term as it failed to clear the July high (1.1909) earlier this month.