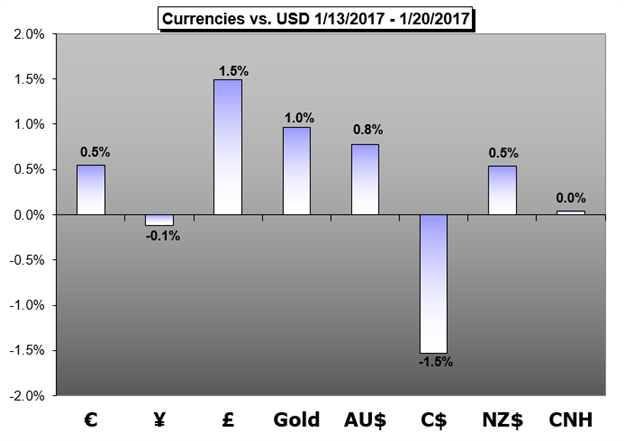 Weekly Trading Forecast: All Eyes on Murky US Fiscal Policy

Donald Trump has ascended to the US presidency but investors are no more certain about on-coming fiscal policy, leaving markets vulnerable to headline-driven kneejerk volatility.

The US Dollar may decline for a third straight week as lingering fiscal policy uncertainty encourages investors to scale back net-long exposure.

ECB President Mario Draghi spoke in dovish tones on Thursday, highlighting the central bank’s commitment to keep its policy accommodative over the course of 2017. However, the inherent pessimism over the Euro-Zone’s growth prospects are at odds with incoming data.

GBP/USD may continue to face range-bound conditions ahead of the ‘Brexit’ deadline as Prime Minister Theresa May pushes for a clean break from the European Union (EU), but the bearish sentiment surrounding the British Pound may subside over the near-term as the Bank of England (BoE) changes its tune for monetary policy.

Gold prices marched higher for a fourth consecutive week with the precious metal up 0.86% to trade at 1207 ahead of the New York close on Friday.

Oil Forecast - US Rig Count Jumps Most Week-on-Week Since Q2 2013, Yet Oil Supported

Oil Traders could have taken the first three weeks of the trading year off given the lack of volatility, but for multiple reasons, we do not expect this quiet price action to continue.