The Dollar has advanced four 3 straight weeks as the freeze from rate skeptics finally thawed. Can the BoJ also regain influence or does it need to take it by force?

The Dollar spent much of the past week consolidating following a three-week advance, but Yellen’s remarks Friday spurred a rally that put the bulls back on the front foot. We will open the new trading week with the USDollar at a two months high but liquidity curtailed by Monday’s Memorial Day holiday.

We are now less than four weeks from the vote waited upon around-the-world; and that is the decision that UK voters will tackle on June 23rd that will decide the fate of the continued EU-membership for the United Kingdom.

The Japanese Yen fell for the fourth-consecutive week against the US Dollar and matched its longest losing streak since the USD/JPY traded above ¥121 through late 2014. Sharp rallies in the US S&P 500 and broader ‘risk’ helped push the JPY lower, but equity markets will be put to the test in what could be a big week ahead for global financial markets.

The Australian Dollar fell for a fifth consecutive week, making for the longest losing streak in 10 months. The currency succumbed to both external and domestic headwinds.

A pickup in the Canadian economy accompanied by slowing job growth in the U.S. may fuel a near-term decline in USD/CAD as the Bank of Canada (BoC) appears to be moving away from its easing cycle, while the Federal Reserve remains in no rush to further normalize monetary policy.

Gold prices fell for a fourth consecutive week with the precious metal plummeting more than 2.8% to trade at 1215 ahead of the New York close on Friday. 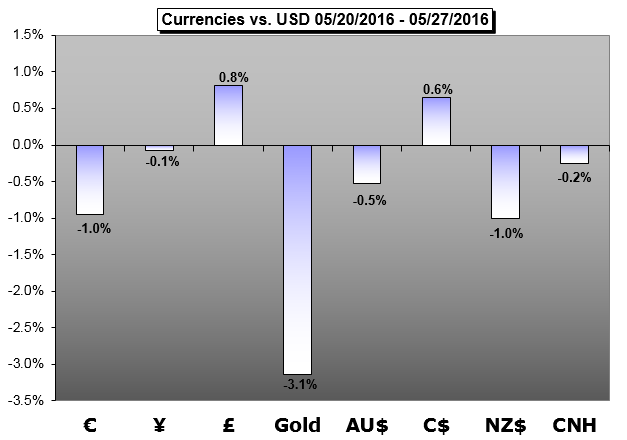