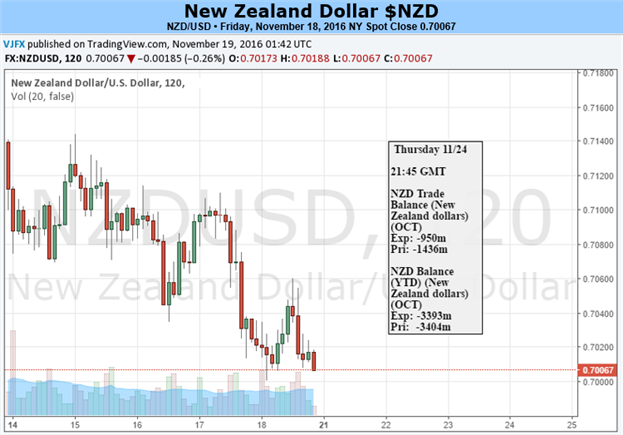 The New Zealand Dollar has performed in Binary fashion in the FX market. If you simply looked at the NZD/USD spot price, you would think the New Zealand economy was underperforming. Much of this effect is the US Dollar, which as strengthened after the U.S. Election to take the RSI(14) above the traditional overbought 70 level on USDJPY, USDCHF, USDNOK, and below the traditional oversold 30 level on AUDUSD, and EURUSD.

While not a leader in the G10, economic data in New Zealand has remained stable through 2016, and recently the New Zealand Dollar has performed well against crosses. As investors continue to digest and forecast what a Donald Trump administration would do to the global economy, commodity- and trade-dependent economies like Canada and Australia continue to be in an environment of sell now and ask questions later.

Therefore, the strong US Dollar may continue to put pressure on the New Zealand Dollar,

The New Zealand economy had some helpful data points after the 7.8 magnitude earthquake on November 14. NZ Finance Minister Bill English noted this week that the quake could dent growth in 4Q16 and 1Q17. In addition to in-line retails sales data, Fonterra increased their 2016-2017 milk price forecast to NZ$6/kg per Bloomberg after another strong Global Dairy Trade auction this week.

Other positive data points have come from foreign visitor spending or tourism that rose 7% YoY as of September. The tourism data complemented the ANZ Bank New Zealand Consumer Confidence Survey that was released on Friday that said consumer confidence was at its highest level since April 2015, although most responses were retrieved per the earthquake per the Bank.

Upcoming data points for the week ahead include Credit Card Spending that may also be discounted if the Earthquake is expected to take a further hit on Consumer Confidence. Lastly, November 24 will follow up the record-wide trade deficit from October of -NZ$ 1,436M, and could also be anticipated to widen if significant long-term goods are needed for infrastructure repair for earthquake damages that are sourced abroad.

The New Zealand Dollar has continued to show steady appreciation on the crosses as economic data is supportive, yet the kiwi remains susceptible to weakness continuing against the USD and possible the JPY should a risk shock take place.