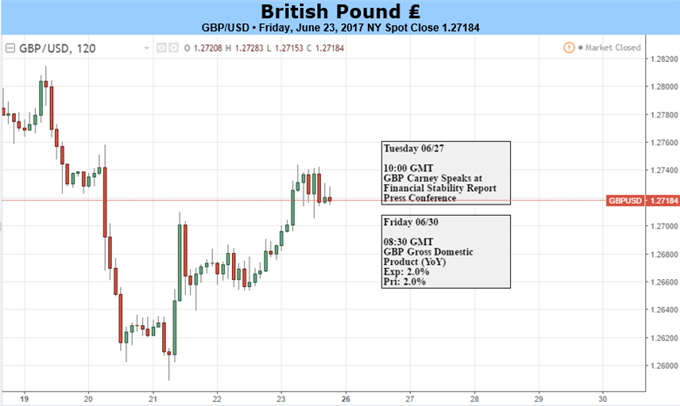 The past week was expected to be all about the Government’s legislative program and Brexit, as UK Prime Minister Theresa May went to Brussels to begin the divorce proceedings between the UK and the European Union. In the event, though, interest rates were the primary driver of movements in the British Pound.

First up was Bank of England Governor Mark Carney, who sent the currency down sharply in his delayed Mansion House speech with comments that were exceptionally dovish. However, he was followed by the central bank’s Chief Economist Andy Haldane, who contradicted him in a far more hawkish address that, for the markets, was more important than the Queen’s speech outlining the government’s agenda.The result was a drop in the Pound on Carney, followed by a jump on Haldane and then a steady climb higher.

Arguably, though, the idea that UK interest rates could be increased sooner than previously expected has now been fully priced in. And that could mean that the spotlight in the days ahead will turn back to the Brexit negotiations and to the fragile state of the UK Government.

As we’ve noted previously, the Pound is likely to be bounced about by leaks from the two sides in the Brexit talks, with signs of a soft Brexit likely to send it up and signs of a hard Brexit likely to push it down. Moreover, at the time of writing, May has still not been able to do a deal with Northern Ireland’s Democratic Unionist Party to give her a majority in Parliament after she fell short in the recent General Election.

Here too, signs of an agreement that will allow the Government to push ahead with its program are likely to be positive for the Pound while an argument between May and the DUP would be negative. With IG Client Sentiment data also giving no strong signal one way or the other, the most likely outcome in the week ahead will be choppy, sideways trading.

What will drive the currency majors in 2017’s second half? Check out the freeDailyFX Quarterly Forecasts