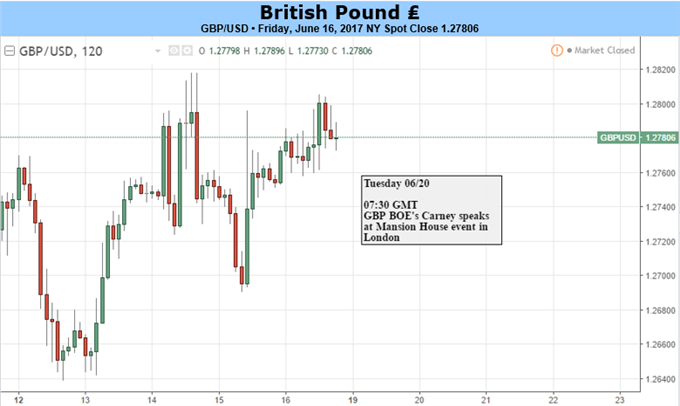 It was a relatively strong week for the British Pound, as the currency posed gains against the Euro, the Yen and the U.S. Dollar. Driving the demand was further development on a couple of pain points that pretty much speaks to the same issue; and that’s the stance of the Monetary Policy Committee at the Bank of England as Brexit negotiations are set to begin on Monday.

Inflation numbers for May were released on Tuesday, and U.K. inflation printed at an annualized 2.9%. This is up from the 2.7% print in the prior month, and well-above the BoE’s 2% inflation target. Two days later, the Bank of England took on a hawkish tilt at their rate decision, voting 5-3 to keep rates flat with Michael Saunders and Ian McCafferty joining Kristin Forbes in dissenting, instead voting in favor of hiking rates. These three votes for a rate hike would be the most that we’ve seen out of the BoE since 2011.

This speaks to a theme that’s been gaining prominence around the U.K. economy for some time, and that’s the expectation that the ‘sharp repricing’ in the value of the British Pound around the Brexit referendum would lead to unsavory levels of inflation that, eventually, would force the Bank of England away from their ultra-loose policy measures. Even before the referendum, BoE Governor Mark Carney warned us of as much; saying that a decision from voters to leave the EU would result in a ‘sharp repricing’ in the value of the British Pound, which could lead to higher levels of inflation along with higher levels of unemployment and slower growth. This would put the BoE in the unenviable position of having to choose whether to a) tighten policy to quell GBP weakness while attempting to temper inflation or b) loosen policy even more to prod growth and employment, while risking even larger losses for GBP and even stronger rates of inflation.

Within a week of the Brexit referendum, the BoE had already shown their hand, and just a month later the bank launched a ‘bazooka’ of stimulus as the currency drove-down even further. The prospect of stronger inflation was a delayed concern for the BoE, as the bank continually said they had a rather high tolerance for an ‘inflation overshoot’, meaning if inflation came-in above their 2% target, they wouldn’t be all that unnerved. This extreme dovish stance eventually produced the backdrop that led to the ‘flash crash’ in early October as an absolute dearth of demand for Sterling allowed the currency to drop dramatically.

After meandering in the in the 1.2000-1.2750 range for more than six months, the British Pound broke out in mid-April on Theresa May’s announcement of early general elections. As we warned at the time, a large portion of that move was likely short cover as a heavily short market met was met with another batch of uncertainty around what was already an uncertain situation (Brexit, itself). After last week’s election results made the situation around Brexit even more opaque, with Theresa May’s Tory party actually losing seats and forcing the new PM to form a coalition, GBP broke back-down below the 1.2750 marker, remaining weak until this week’s bullish drivers showed up.

If all factors were held equal, this week’s drivers should’ve produced a pronounced bullish move in GBP as this could be further emblematic of the ‘shift’ within the BoE, as driven by inflation. But they didn’t, instead we merely rallied up to a ‘lower-high’ at which point sellers showed-up, and this is likely due to the fact that next week sees the beginning of Brexit negotiations with the EU. Further – the most hawkish member of the BoE, Ms. Kristin Forbes, is leaving the MPC at the end of the month, so one of those three votes will no longer be voting for the Bank of England. Mark Carney is fairly invested here, so, at the very least, there will probably be some dovish lobbying within the bank as we near future rate decisions.

On Brexit discussions: We’re almost assured of uncertainty and it’s probably a pretty safe assumption that we’ll see some acrimony as these discussions deepen. This theme will likely take the driver’s seat for GBP price action for the near-term as the long-term repercussions of these negotiations could be seen as significant in comparison to month-to-month data prints. Given the high probability of the Bank of England’s hawkish stance being transitory in nature, also combined with the headline risk that we’re probably going to see out of Brexit negotiations, the forecast for GBP will be set to bearish for the week ahead.