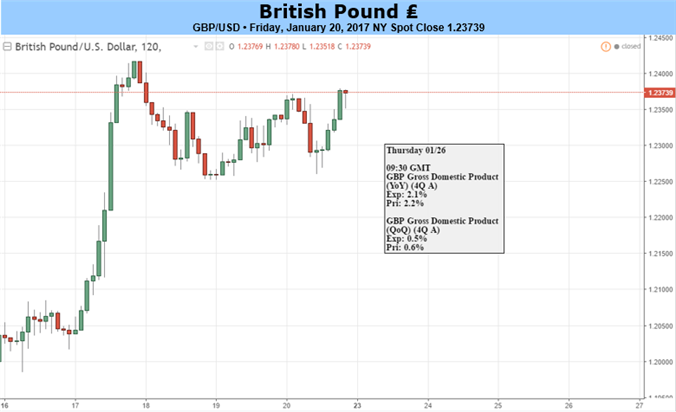 GBP/USD may continue to face range-bound conditions ahead of the ‘Brexit’ deadline as Prime Minister Theresa May pushes for a clean break from the European Union (EU), but the bearish sentiment surrounding the British Pound may subside over the near-term as the Bank of England (BoE) changes its tune for monetary policy.

Even though the BoE looks poised to retain the highly accommodative policy for the foreseeable future, the recent uptick in the U.K. Consumer Price Index (CPI) may sway central bank officials to adopt a more hawkish tone at the next ‘Super Thursday’ event on February 2, and Governor Mark Carney may show a greater willingness to gradually move away from the easing-cycle as he anticipates a ‘notable’ increase in inflation. With that said, market participants may pay close attention to Governor Carney next week as the central bank head is scheduled to speak at the G20 conference in Wiesbaden, Germany, but more of the same rhetoric may keep GBP/USD within the current range as the Monetary Policy Committee (MPC) warns ‘policy can respond, in either direction, to changes to the economic outlook as they unfold to ensure a sustainable return of inflation to the 2% target.’

Looking at the economic docket for the week ahead, the 4Q Gross Domestic Product (GDP) reports coming out of the U.K. & U.S. may generate a buzz as both regions are projected to grow at a slower pace compared to the previous quarter, but the backward-looking data prints may do little to alter the range-bound conditions in the pound-dollar exchange rate amid the diverging paths for monetary policy. Fed Fund Futures are now pricing a greater than 70% probability for a June rate-hike as Chair Janet Yellen argues the Federal Open Market Committee (FOMC) is ‘closing in’ on its dual mandate, and the pickup in interest-rate expectations continues to foster a long-term bearish forecast for GBP/USD as the central bank remains on course for further normalize monetary policy in 2017. 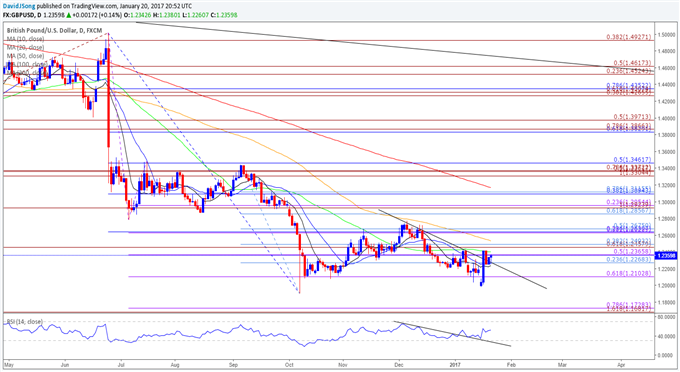 The failed run at the June low (1.1905) may open up the British Pound ‘flash crash’ range especially as price & the Relative Strength Index (RSI) break out of the bearish formations carried over from the previous month. In turn topside hurdles are in focus for the days ahead, but near-term price action appears to be capped by the 50-Day SMA (1.2417), which stands just shy of the monthly opening high (1.2433).