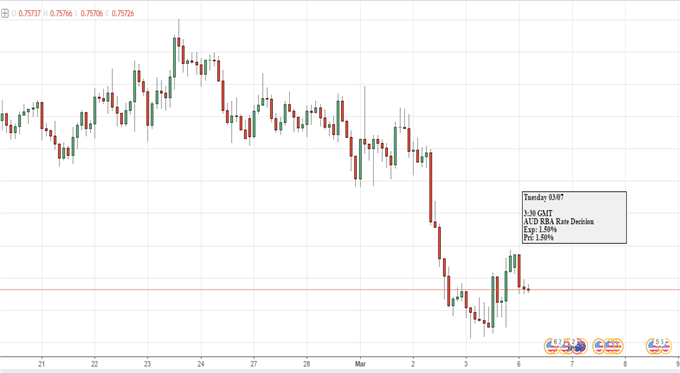 The Australian Dollar failed to rise last week on the ostensibly quite bullish confirmation that its home economy had avoided technical recession and returned to growth in the final quarter of 2016.

There were two main reasons for this, one of which will probably bear quite heavily on the coming week’s trade too. So, let’s deal with the other reason first. While Australia’s third-quarter growth contraction was a shock, the economic data investors have seen since made it quite clear that it was also something of an aberration.

Indeed, even the Reserve Bank of Australia had been wont to say as much. So last week’s news of GDP growth was widely expected and confirmation didn’t bring out many more Aussie buyers.

The other more pertinent reason for the currency’s failure to rise arguably has more to do with the Federal Reserve than anything closer to home. In the past week, Fed speaker after Fed speaker has chosen to hold forth on the propriety of raising interest rates sooner rather than later. Even usually-measured governing board member Lael Brainard said last Wednesday that rates could rise “soon.” San Francisco Fed chief John Williams sang from a similar hymn sheet on Thursday, and these two are only the latest voices in a growing, hawkish chorus.

By contrast the RBA has been at pains to let the market know that, while Australian rates might not fall again from their record lows anytime soon, they probably won’t be rising very quickly either. The central bank’s position appears to be that, while Australia’s mining industry is doing exceptionally well, thanks as ever to China, there are still some clouds over domestic demand, and the domestic economy more generally.

Until they clear, if they clear, rates are likely to stay put. That leaves the interest-rate-differential backdrop squarely in the greenback’s favour, which is probably why AUD/USD has been unable to retake the highs it scaled before last November’s US Presidential vote. Even if US rates don’t go up this month, the Fed’s basic expectation remains that it will make three, quarter-percentage-point increases this year.

Now of course this week will bring a monetary policy decision from the RBA, on Tuesday. But it is not expected to alter its interest rate setting nor to depart from the cautious tone it has been striking all year. That could leave Aussie bulls with nowhere much to go even as the market as whole awaits the month’s most important interest rate call; March 15’s date with the Fed.

Still short of the highs: AUD/USD 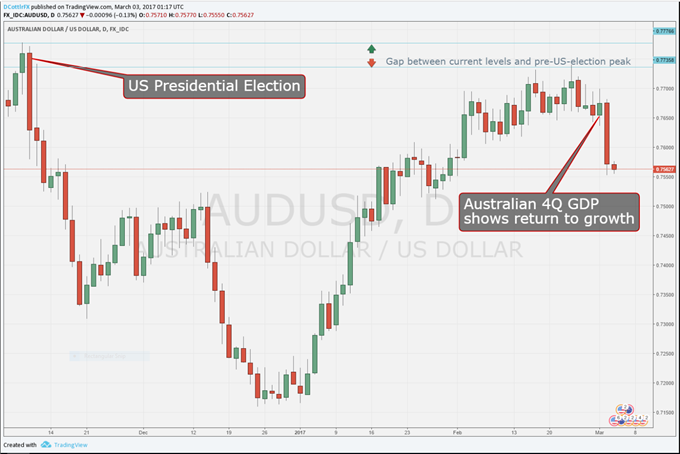 Would you like to know more about trading the financial markets? Take a look at the DailyFX trading guide.