Australian Dollar Could Be Vulnerable to Holiday Blues 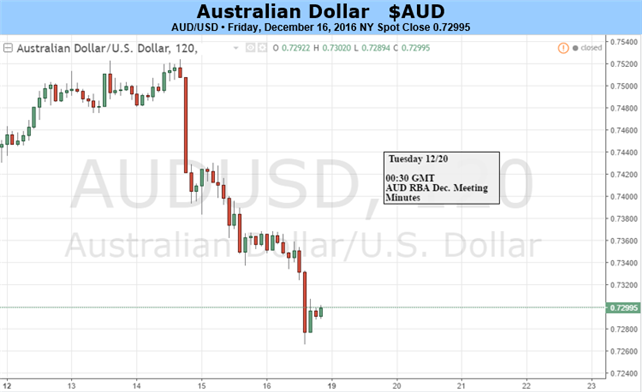 •But has the Fed done enough of the RBA’s work for it to head off lower local rates?

•Sadly, we’re unlikely to find out this week, which could leave the AUD vulnerable

The Australian Dollar can probably look forward to a quieter week in the run-up to the holiday break, and battered bulls would probably welcome it after a tumultuous few sessions. That doesn’t mean the weakened Aussie currency will rise far, however and it may yet slide further.

The US Federal Reserve’s interest-rate hike on December 15 could hardly have been more widely expected. However, its notably hawkish tone and prognosis of three more such rises in 2017 caught many markets off guard, perhaps none more so than AUD/USD.

Having loitered around the 0.75 handle for much of the week, bulls abandoned all hope of defending those uplands as the cross tumbled to the 0.73 area in the wake of the Fed.

The main fundamental issue now for the Aussie is whether the US central bank has done enough of the Reserve Bank of Australia’s work for it to reduce the chance that Australian rates will be going lower. The RBA has been known to fret that local currency strength might threaten its inflation mandate (a strong Aussie means imports are cheaper and imported inflation is lower).

Well, the local currency has certainly lost some strength, but the coming week is very short of likely data clues, either from Australia or from China (whose data often shifts the Australian currency).

We will get the minutes of the RBA’s December 6 monetary policy meeting, where the central bank opted to keep the cash rate at its 1.50% record low. It didn’t know what the Fed would do this month back then, of course. Now it does – and so do we – but the minutes might be too historic to move the markets.

Fundamentally, Australian growth was worryingly weak in the third quarter and the data released since have not been strong enough to reassure investors that the hoped-for fourth quarter fightback is coming.

The picture is simply too patchy, with a step back for every forward stride. For example, job creation was quite strong in November, according to official data, but consumers were found to be feeling far from festive as the crucial holiday shopping season looms.

In any case, the big trading question for the pre-holiday week will be focused on the ‘USD side’ of AUD/USD. Will traders decide to maintain their strong-US Dollar bets into the break, or to take some (probably considerable) profit and return after the seasonal wind-down?

Given the relative preponderance of US data in the coming week, including another look at third quarter growth, it seems likely that the US Dollar will remain very much the currency in play. That could then mean that the Aussie heads yet lower, assuming the US numbers hold up, even if it doesn’t fall to anything like the extent it did in the past week.

What’s keeping DailyFX analysts awake at night? Check out our webinars and they’ll tell you themselves.