The Australian and New Zealand Dollars gapped lower at the start of Asia’s Monday session. Condemnation by Xinjiang’s regional Governor over the US’s legislative approval of the Uighur Human Rights Policy Act last week failed to spark volatility, but it could become a major obstacle in US-China trade talks. As it stands, tensions are already high after US President Donald Trump signed a controversial bill last week. 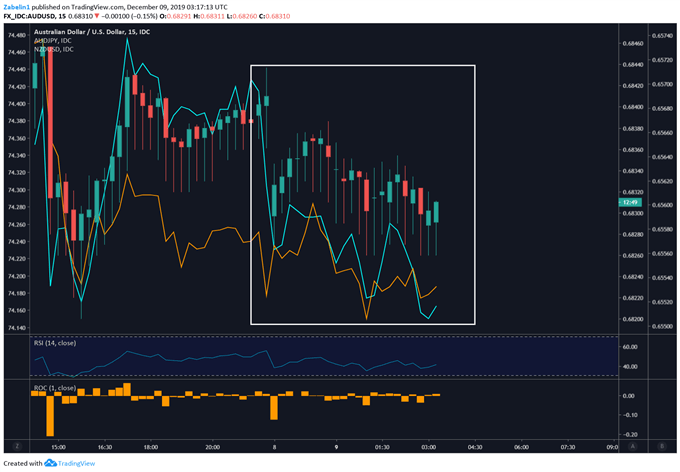 Euro, US Dollar Volatility May be Tamed by Upcoming FOMC, ECB

EUR/USD volatility from German export and Eurozone confidence data may be curbed by traders waiting for key fundamental catalysts later in the week. The FOMC and ECB rate decisions – in addition to the UK election – are the biggest known event risks that are at the front of traders’ minds. Barring any major sudden developments – like trade war news – EUR/USD will like focus on them and other major risk trends.

EU-US Trade War: What is Going to Happen?

EU-US trade tensions remain high after US President Donald Trump announced multi-billion-dollar tariffs against France after Paris said it was implementing a new digital tax. The response from Washington comes from the impression that the tax was specifically targeting US tech companies. The levies against France would include cheese, porcelain and luxury goods.

Though France has made it clear that it intends on retaliating if the US shrugs at diplomacy and pursues the path of economic war. Furthermore, the Dutch Finance Minister made it clear that an act against one of the largest Eurozone economies would be an attack on all: “Economically we are a force to be reckoned with. I am convinced that within a trade war as Europeans we will act as one”.

As it stands, the US is already considering using Section 301 of the Trade Act of 1974, which would essentially entail a broad investigation of the EU and US’ economic relationship. This opens the door for a prolonged period of uncertainty, especially from the point of view of businesses who may be hesitant to expand if a trade war erupts. This may then lead to softer economic growth which may then fuel the urgency for ECB rate cuts.